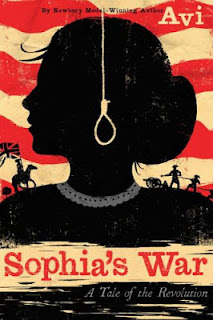 The versatile Avi, who won a Newbery years back for his historical novel Crispin:  The Cross of Lead, pens a real historical thriller in his latest novel, Sophia's War, set during the American Revolution.  This is definitely my favorite Avi novel since The True Confessions of Charlotte Doyle.  Like that celebrated adventure/historical nove, Sophia's War features an indomitable young heroine, who thrusts herself in the center of political and military intrigue during one of the most famous betrayals in American history.

The novel opens in 1776 in loyalist-occupied New York City, the same setting for Laurie Halse Anderson's Seeds of America novels Chains, and Forge.   Twelve-year old Sophia Calderwood adores her older brother, William, who has enlisted in the revolutionary army.  Although she's a well-educated young woman who is well-versed in all the revolutionary rhetoric of the time, Sophia can't help herself when she becomes infatuated with the handsome and charming British officer, John Andre, who is billeted with her family.  But when her brother becomes a prisoner in the horrible prison ships off the coast of New York and Andre refuses to help, Sophia's feelings change, and soon she is eager to avenge her brother's fate.

When Sophia is approached by an acquaintance to spy for the revolutionaries by working as a maid at the British general's grand house, she discovers a nefarious plot--one which involves not only the handsome John Andre, but her hero, the acclaimed American officer Benedict Arnold.  Can she pass on what she knows to the revolutionary command, and will anyone believe her?

This is a tremendously exciting novel, one which I devoured in one sitting.  Told in the first person by Sophia, the novel is fast-paced, and action-packed.  While easy to read, the novel includes 18th century phrases scattered through the text, giving Sophia an authentic voice for the period without making the text too difficult for middle grade readers to read.  A few of the colorful phrases, such as "bosky," sent me to the glossary of 18th century words included in the backmatter.  Avi also includes an Author's Note, which explains that the characters of Sophia, her parents, and brother, are entirely fictitious, but the other figures who populate the novel are real enough and the stories of the American prisoners in New York and the handsome British officer John Andre are as historically accurate as he could write them.

Avi concludes his note with a passionate defense of historical fiction:  "History provides endlessly amazing stories.  Historical fiction, I believe, can illuminate these stories with the ordinary people who make extraordinary history...Truth may be stranger than fiction, but fiction makes truth a friend, not a stranger."

Thanks, Avi, for another terrific historical title for young people to add to your impressive canon of over 70 works.

I always enjoy reading Avi and this really is a good one from him. I love how he can mix fact and fiction so well.

It sounds so exciting and I would love to get a good perspective on Benedict Arnold as well! We always hear that he's a traitor but not really his story to be able to emphasize with the choices he faced.