The Inspiration Behind Ro, my Heroic Coyote
Guest Post by Helen Sedwick

You might think a dog inspired me to create a coyote character, but actually it was a cat.

When I was writing COYOTE WINDS, a stray or feral kitten moved into our yard. About four months old, he darted past my window several times a day with a vole dangling from its mouth. He was thin, skittish and scruffy.

I put out cat food, and the kitten hid in the bushes until I stepped away. Then he raced to the bowl and ate as fast as he could. Every day, I stood closer to the bowl until finally the kitten had to let me touch him before he could eat. To my surprise, and probably to his, the kitten was as hungry for touch as he was for kibble. Within days, he was pressing hard against my hand, rolling his head so I could scratch his favorite spots, purring deeply. Reminded that even animals want to be loved, I was inspired to create Ro, the coyote of COYOTE WINDS. 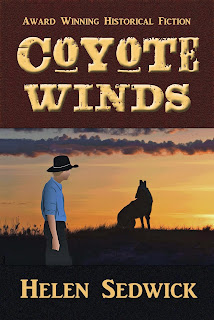 At the opening of the novel, Ro, as a young pup, is caught outside in a dust storm. When thirteen-year old Myles finds him hours later, the pup is half-buried and limp from dehydration. So much grit has worked its way under one eyelid, it is swollen shut. Myles nurses the pup back to health, and they form the strong bond that so often connects a boy and his dog, or in this case, his coyote.

When I wrote the chapters in Ro’s perspective, I tried to observe the world simply and without judgment, as I imaged an animal would do. His motivations are immediate--hunger, fear and the need to belong.  I wanted to capture the canine’s sense of play as Ro befriends the hog Spark Plug and “flies” in the back of the pickup truck.

But Ro, like any interesting character, struggles with conflicts. He straddles the worlds of nature and man, accepted by neither. As much as he loves Myles, when he hears the wild coyotes Ro’s heart aches for the physical romp of the pack--shouldering his brothers in fake battles and sleeping in bundles of fur. But wild coyotes see him as a rival and attack him. When Ro skirts the farms of men, he hears bullets hiss through the grass around him. 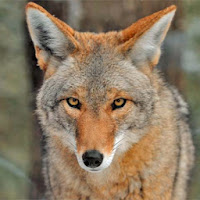 Mid-way through the novel, Myles drives Ro away because he fears the settled land has become too dangerous for the coyote. But Ro has nowhere else to go. He hovers nearby, watching as machines, fences, and dust take the place of grasses, mesquite and sage. He wants to warn the boy of a danger he senses, but doesn’t understand. Ro’s perspective gave me a way to observe the changing world without the overlay of human ambition to control it.

COYOTE WINDS is set on the western prairie in the years leading up to the Dust Bowl. Many people do not know that the Dust Bowl was one of the worse man-made environmental disasters in history. Believing in the modern technology of the tractor and fertilizers, farmers plowed up dry, marginal land the size of Ohio in the 1920s. When drought hit in the 1930s, those vast acres of turned soil were lifted by the prairie winds, and the Dust Bowl was born. Ro provide me a way to describe that history through different eyes.

The longer I worked on COYOTE WINDS, the more I fell in love with Ro. He embodies my themes about loyalty to a person, a family, and a dream, and whether loyalty has limits.
By the way, coyotes have been successfully tamed in real life. Shreve Stockton, a writer and photographer in Wyoming, has a wonderful website about Charlie, her coyote which she adopted when he was ten days old.

About that little kitten in our yard.  He has grown into a Budda-bellied, lushly-coated lap-lover who tolerates our dog’s overly enthusiastic affection and sleeps inside on cold nights. And he reciprocates our love by leaving slightly munched voles on the front steps. His name is Tomas.

Helen, thanks so much for contributing a guest post to The Fourth Musketeer.  I will think of Ro every time I see a coyote roaming around our Southern California neighborhood!