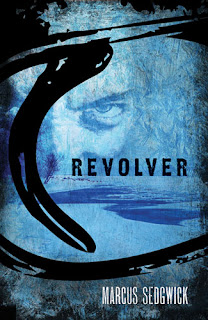 Originally published in London in 2009, Revolver combines two of my favorite genres: historical fiction and adventure/survival stories. Sedgwick is the author of ten previous novels for young people, most of which include gothic or paranormal elements. This psychological mystery/survival story, however, set in the forbidding world of the Arctic Circle, does not need any hints of vampires, ghosts, or witches to cast a spell on its readers. Once begun, the reader will have a hard time putting this book down.

The story alternates between Giron, an iron mining town, in 1910, and Nome in 1899, at the time of the Alaskan Gold Rush. What happened in Nome that has made 14-year old Sig's father be on the run for so many years? When Sig's father dies after a fall through the frigid ice, Sig and his sister are visited by an evil man, Gunther Wolff, who claims that he is owed half of their father's gold. They know nothing of any gold, and are terrified that this giant of a man will kill them both. An ancient Colt revolver--and ammunition--is hidden in the back of their cabin. Can Sig's resourcefulness--and the Colt revolver--possibly rescue them from this threat?

The author goes back and forth between Sig's terrifying encounter with this man whom he cannot remember and the time years before when the family lived in Nome. Sedgwick writes of Einar, the father: "He'd come for the gold, and he hadn't meant to stay. These things never lasted long, Einar knew." But when Einar is offered a job as an Assay Clerk, the government official who "does the testing and the weighing and the paying," the family settles into this harsh environment. That is, until tragedy strikes, after the arrival in Nome of the villainous miner Wolff.

There are several scenes in this book that suggest rape and murder; even though not described in graphic detail, these scenes make this book appropriate for a young adult audience but not recommended for younger children.

In the U.K. , Revolver has been short-listed for a number of prestigious prizes, including the Carnegie Medal, the Independent Booksellers Award, the UK Literacy Association Award, and the Northern Ireland Book Award, The book was also nominated for the Guardian Children's Book Prize.

This is the kind of fast-moving adventure story that would make a good recommendation for reluctant readers, particularly boys. You can read the book's first three chapters on-line using the widget below. Posted by Fourth Musketeer at 3:41 PM