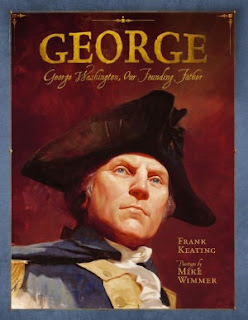 Today is Washington's actual birthday, and the perfect time to take a look at a new picture book biography of our foremost founding father and first president.  In this new release by former Oklahoma governor Frank Keating, George tells his own story, punctuated by excerpts from Washington's own "Rules of Civility and Decent Behaviour in Company and Conversation," written in his own hand when he was only fifteen.  The text covers the well-known outlines of Washington's life in a simple yet compelling manner, demonstrating how he applied his "Rules of Civility" to all that he did:  "They were my primer on life.  I first learned them in school.  I wrote them down.  They became a part of me."

With traditionally-styled oil paintings by artist Mike Wimmer, the stunning illustrations lend an epic gravitas to the narrative, as we see Washington as a baby, a young boy studying, a young man working as a surveyor, a soldier, a married man, and of course a general and a statesman.

Back matter includes both an author's note and a note from the artist.  Wimmer describes his intensive research in order to portray costumes and setting accurately in his paintings, especially his use of paintings from Washington's own time.  End notes provide further explanations for the exact setting of each of the paintings.  The author also includes a brief bibliography on Washington for further reading.
Posted by Fourth Musketeer at 5:00 AM