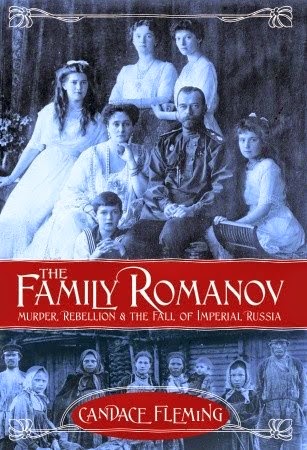 Candace Fleming is a master at writing narrative nonfiction that is entertaining as well as informative, and her newest book on the tragic and doomed Romanovs is a worthy successor to her last foray into nonfiction, the highly acclaimed Amelia Lost.

Fleming expertly weaves together the intimate life of Russia's last czar and his family with the saga of the revolution brewing underneath their royal noses, beginning with workers' strikes in 1905 and leading up to Lenin's seizing power in 1917.  Interspersed with her compelling narrative are original documents from the time that tell the stories of ordinary men and women swept up in the dramatic events in Russia.

Unlike many books for young people, which seem to romanticize the Romanovs, Fleming doesn't try to make the family into martyrs.  Indeed, it is hard to have a lot of sympathy for the Russian royal family after reading Fleming's account.  Fleming describes Nicholas as a young boy as "shy and gentle," unable to stand up to his "Russian bear of a father."  His wife, the Empress Alexandra, a German princess raised to be a proper Englishwoman under the wing of Queen Victoria, never felt comfortable with the excesses of the bejeweled, partying Russian aristocracy, and encouraged her husband to retreat to Tsarskoe Selo, a park 15 miles and a world apart from St. Petersburg.  Fleming brings us inside of their privileged--but also strangely spartan--life (for example the children were bathed with cold water in the mornings and slept on army cots in their palace!), one in which they had almost no contact with outsiders.

Fleming manages to integrate her narrative history of the Romanov family with the larger history of the turbulent times in Russia, as the czar is forced to resign and he and his family are exiled to Siberia, fleeing in a train disguised as a "Japanese Red Cross Mission" so that the royal family would not be captured by angry peasants.  She skips back and forth from the family's saga to what is happening in the capital, with plenty of original documents such as an excerpt from journalist John Reed's first-hand account of the swarming of the Winter Palace as well as excerpts from many other diaries.

In my favorite quote in the book, Fleming discusses how Lenin nationalized the mansions and private homes throughout the country, while the owners were forced to live in the servants' quarters.  She quotes one ex-servant as saying:


"I've spent all my life in the stables while they live in their beautiful flats and lie on soft couches playing with their poodles...no more of that, I say!  It's my turn to play with poodles now."


Whatever one's feelings about the Romanovs, one cannot help but be moved by the account of their cruel assassination in the basement of their quarters in Siberia.  Particularly ironic is the fate of the royal children, who did not die immediately because they were hiding the family jewels in their camisoles and other undergarments.  This layer of jewels unwittingly created a bullet proof vest that protected them initially, until they were finally murdered with bayonets and then with gunshots.  The bodies were immediately hidden in the woods, where the remains were not found until 1979 and then kept secret until the fall of communism in Russia.  Ironically, the Romanovs have since been canonized by the Orthodox Church in Russia.

The book is abundantly illustrated with archival photographs.  An extensive bibliography is included, as well as a discussion of primary and secondary sources.  Fleming also includes suggestions of websites on the Romanovs, as well as source notes for each chapter and an index.

Posted by Fourth Musketeer at 6:00 AM 3 comments: 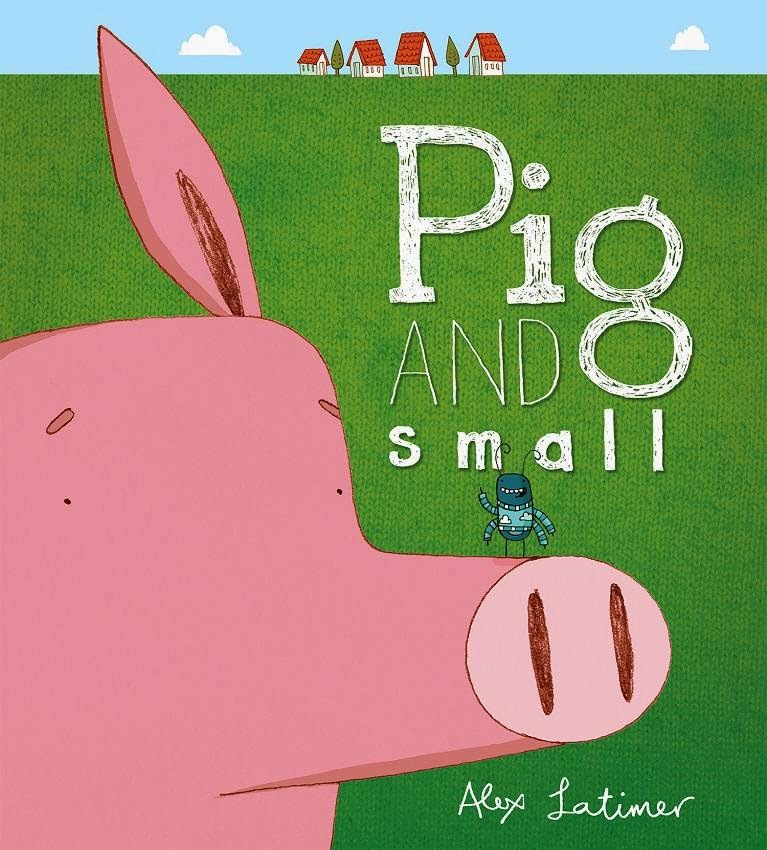 In this laugh-out-loud new picture book from  South African writer-illustrator Alex Latimer, we discover that while it's not always easy to be friends with those who are different from us, the result can be worth the extra effort.

Pig is completely flummoxed when, for no reason at all, his nose begins to squeak. 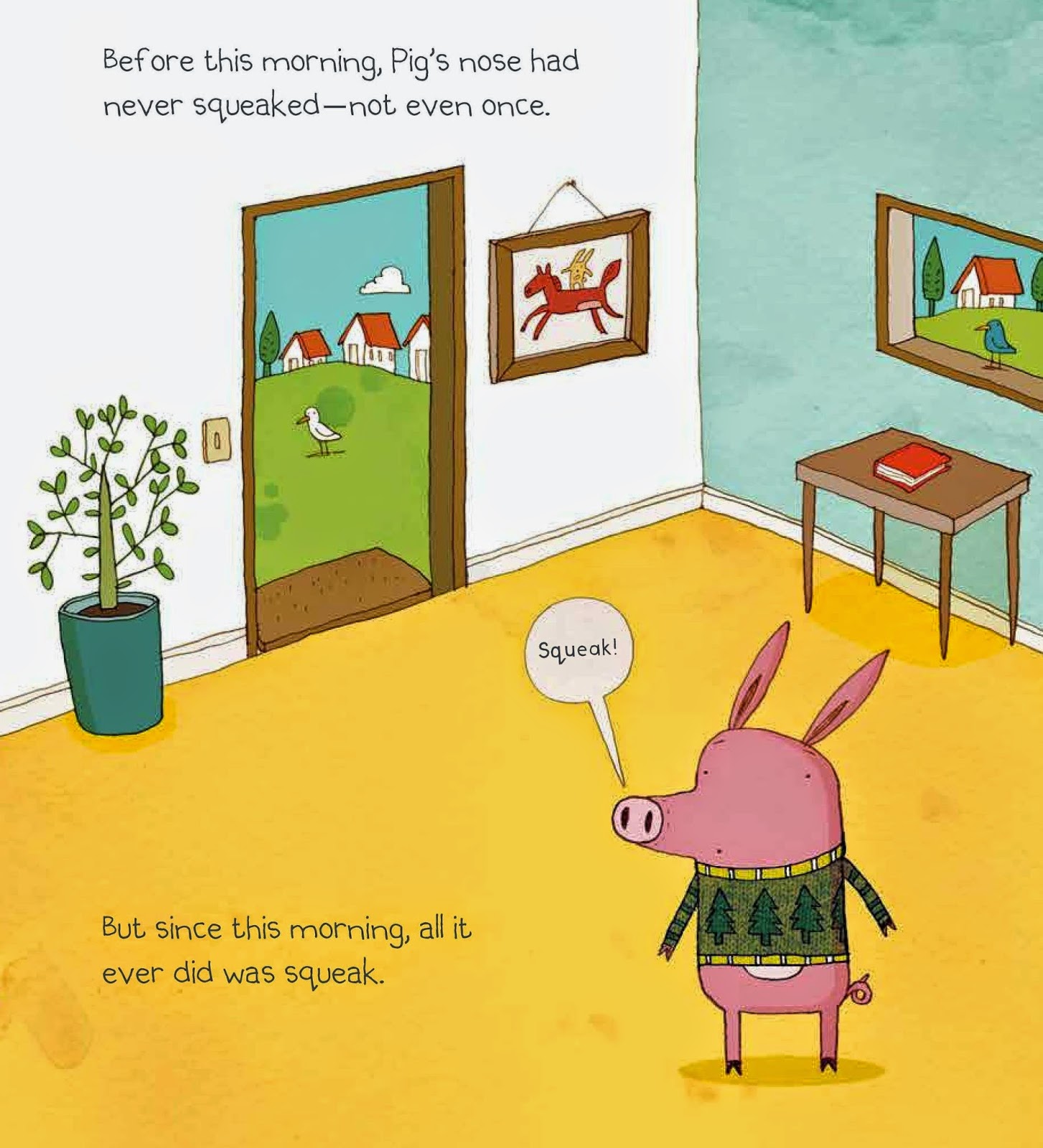 What could it be? Time to get out the medical book, of course, to look for Squeaky Nose Syndrome.  But it's not in the book (although the book includes Squeaky Knee Syndrome and others).  Finally, after much observation, Pig discovers there's a tiny bug on the end of his nose, waving and squeaking at him.  Pig can tell by the bug's friendly squeaking that he wants to be friends, but the activities they try --a tandem bike ride (with Pig pedaling and Bug holding on for dear life), a game of chess, making matching sweaters--don't work very well. 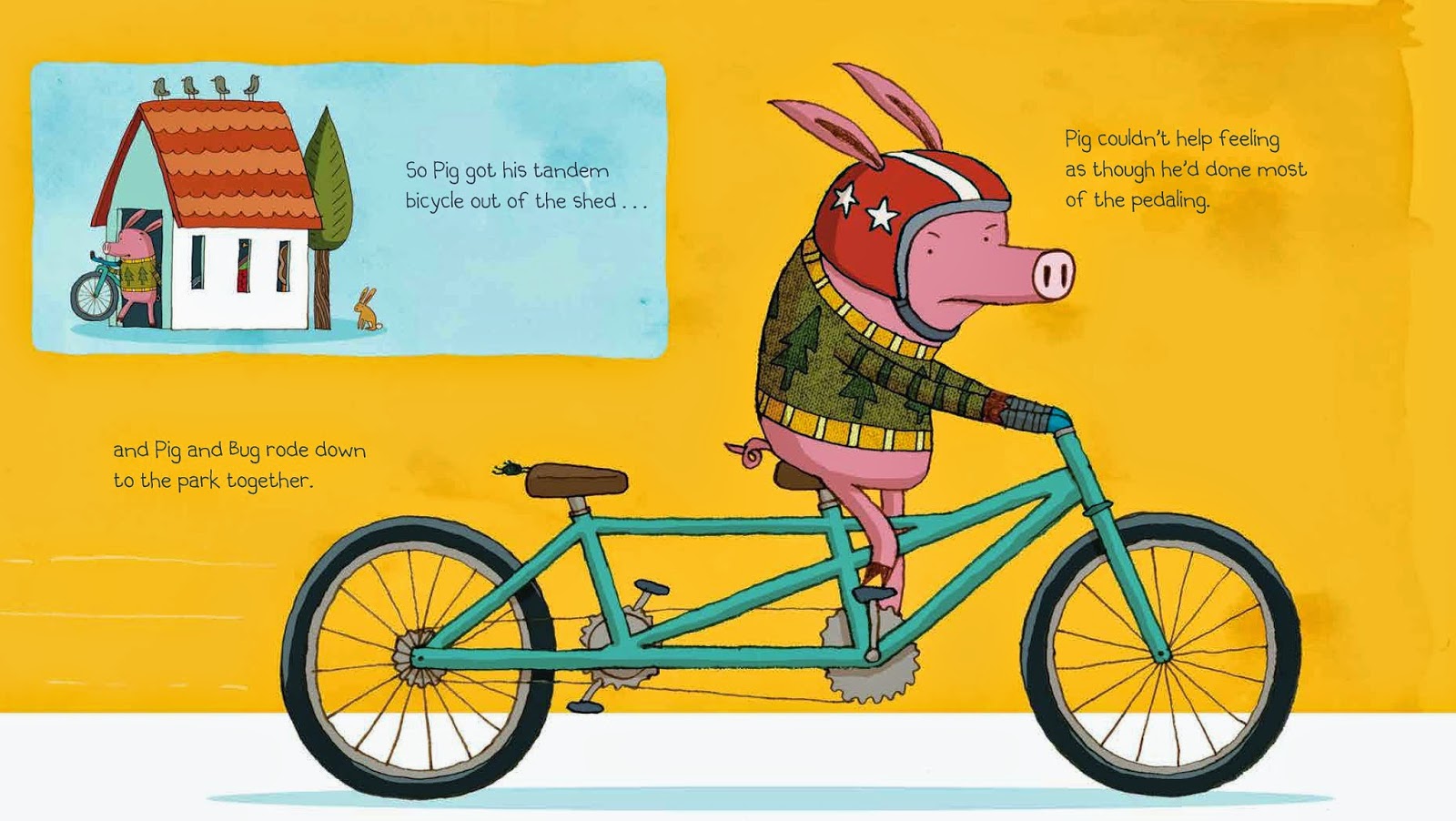 They are about to give up, when Pig has a sudden inspiration--a movie!  Bug doesn't eat much popcorn, and he can sit right on Pig's ear.  Soon they can think of all kinds of things they could do together!  They even forget that one of them is big and the other little, until, in a surprise twist, an elephant comes along to ask if he can be friends, too.

Alex Latimer's whimsical cartoon-style artwork is distinctive, with speech and thought bubbles taken from traditional cartoons.  The illustrations are created first as pencil drawings, then digitized and finished with a bright color palette with orange and turquoise dominating.  The colorful artwork meshes perfectly with his witty and engaging text. The theme of the challenges of friendship with someone different is a universal one, perhaps particularly appropriate in Latimer's hometown of Cape Town, South Africa, where the "rainbow nation" of post-apartheid still struggles with issues of equality for all its citizens, as we continue to do in the United States.   This book would work well in a preschool or early elementary storytime, and could encourage discussions about how we get along with others.  I could easily see a writing prompt about imagining activities Pig, Bug, and elephant could do together, for example.  Latimer's earlier work, Lion vs. Rabbit (Peachtree, 2013), in which a clever trickster rabbit outwits a lion, is also a terrific storytime selection.

For more on Pig and Small, check out these other blog tour stops:

To enter to win a copy of this wonderful new book, leave your e-mail in a comment below.  Winner will be drawn on 9/30/14.

Posted by Fourth Musketeer at 6:00 AM 14 comments: 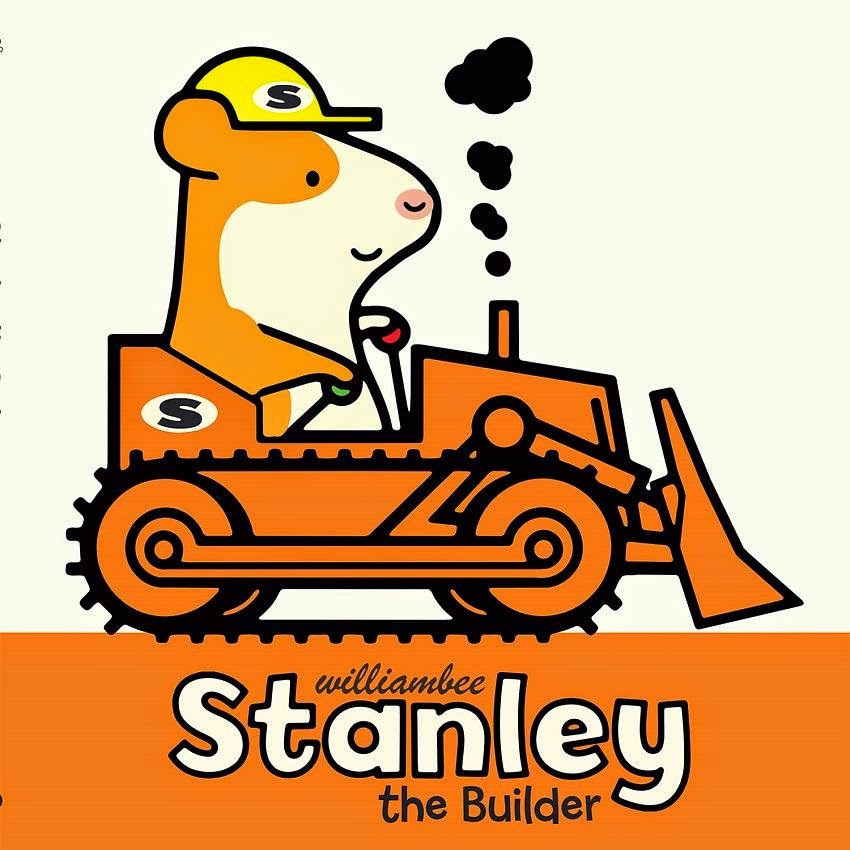 In this delightful new picture book series from British author and illustrator William Bee, Stanley the hamster is very busy--building houses,  working at a garage, even running a farm.

In Stanley the Builder, Stanley is building a house for his friend Myrtle the mouse.  He'll need his orange bulldozer, his yellow digger, and his green crane. Step by step, he prepares the land and then builds the house. Together with his friend Charlie, he finishes the project by painting the house in Myrtle's favorite colors--red, white, and blue--before returning home for supper, a bath, and bedtime.

In this series, Bee uses very simple vocabulary and minimal text together with very appealing digitally-created images to craft a story that is equally appropriate for two distinct audiences:  toddlers/preschoolers and beginning readers.

There are so many things to like about this book, but first and foremost are the illustrations, with their clean black outlines, flat bright colors, and simple shapes (not to mention adorable hamsters...)  Bee's U.S. publisher for this series, Peachtree Publishers, has kindly provided some artwork so The Fourth Musketeer's readers can get a better sense for Bee's unique artistic style.  I was especially interested to note that Bee trained as a designer (check out his quirky website, which gives little information on his books but tells you all sorts of interesting trivia about his passions for vintage cars and the Queen).  His design flair can be seen in everything from the endpapers (see first image below) to the font chosen for the text. 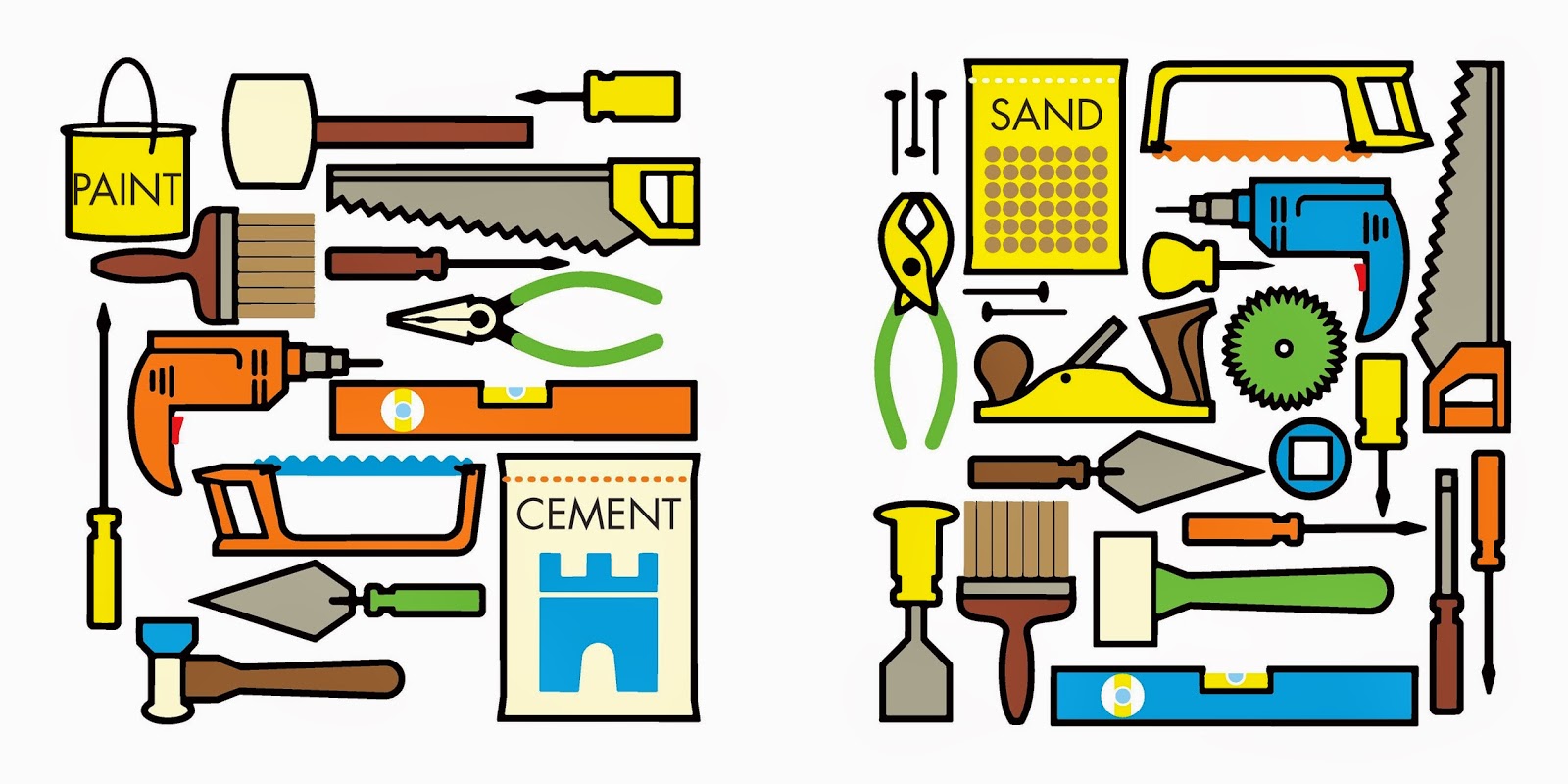 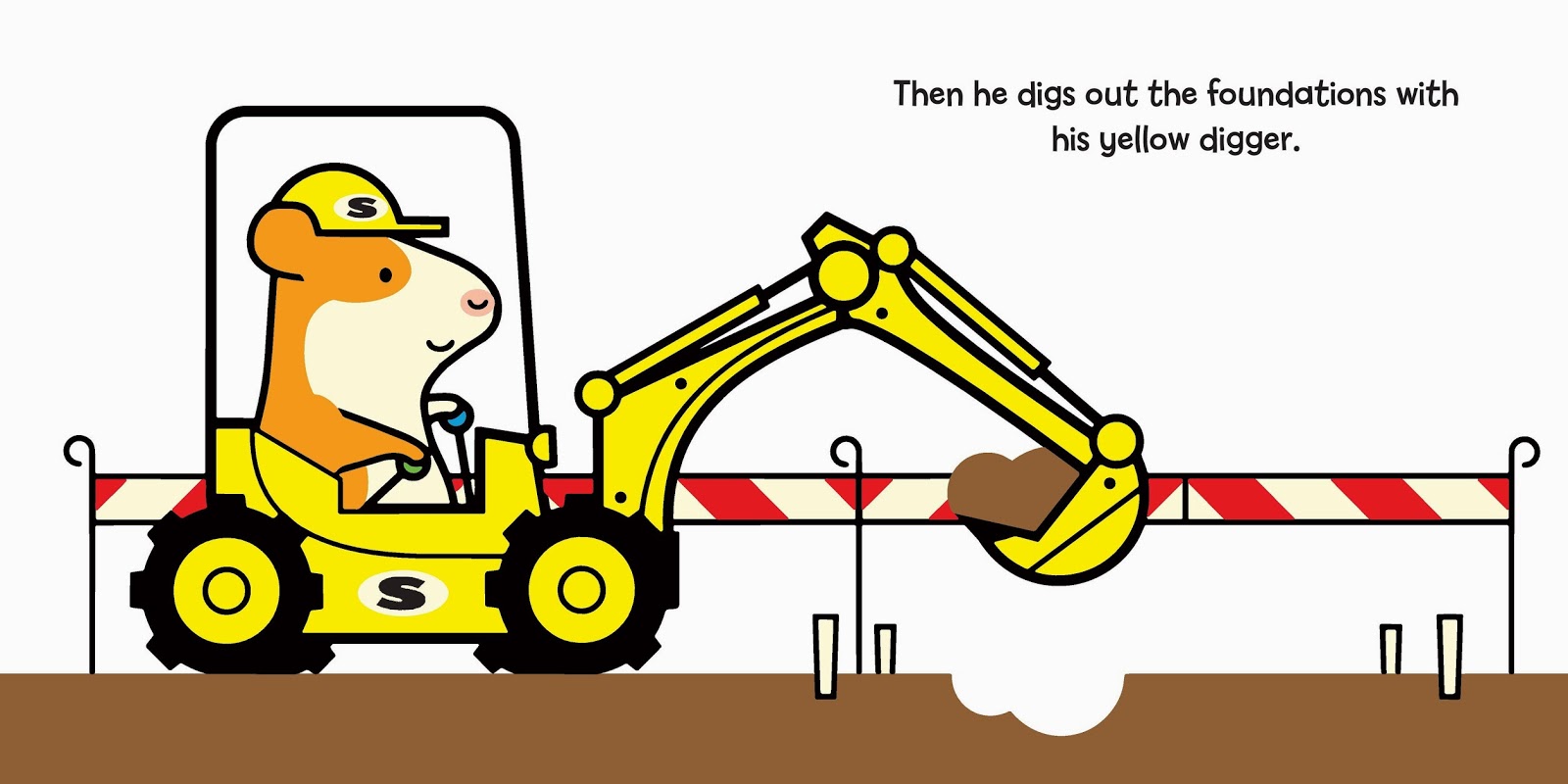 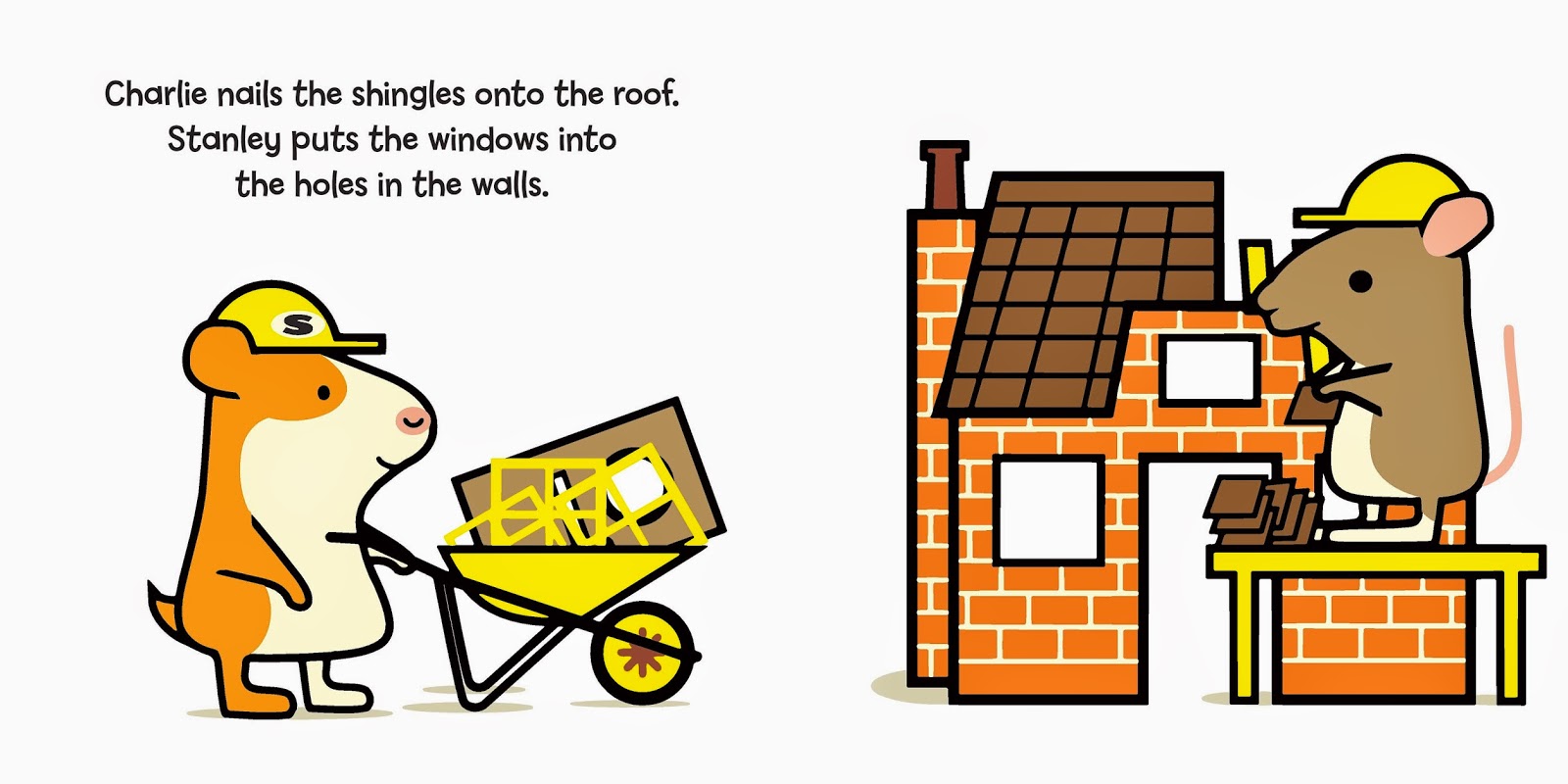 While this series is a sure-fire winner with toddlers and preschoolers, it's also ideal for beginning readers, with simple sentences and minimal vocabulary.  Even with the limited vocabulary, Bee uses correct words for different tools and parts of the house, such as "shingles" for the roof, thus providing a rich use of words for the earliest readers.  The book will also allow young readers to practice sequencing, since the steps for building a house are clearly delineated, and they can even re-tell the story using just the pictures as well.

For more on Stanley, please see the following blog tour stops from earlier this week:

For a chance to win a copy of Stanley The Builder, courtesy of Peachtree, please leave a comment below (include your e-mail address so I can reach you!)

Posted by Fourth Musketeer at 5:00 AM 8 comments: