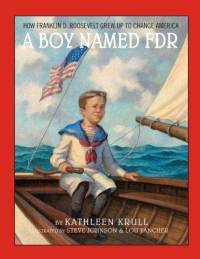 
How did a boy who grew up in the most privileged of American households become one of our presidents who did the most for the “common man”?  Award-winning nonfiction author Kathleen Krull attempts to provide some answers to this historical mystery in her picture book biography of FDR, which concentrates on his youth and early adulthood, before he became president.  As she explains in her preface, FDR was the “ultimate rich kid,” but one who is now ranked as one of our most inspirational presidents, due to his leadership during “two of our most frightening times,” the Great Depression and World War II.


Krull paints a verbal picture (accompanied by lovely illustrations done in oil in a traditional style) of Franklin Delano Roosevelt as an infant and toddler, drinking literally out of a silver cup and wearing clothes with fancy lace collars.  As a young boy he had his own pony and learned how to hunt and be a proper gentleman.   He was so indulged by his parents, and when he got in trouble, his father would tell him, “consider yourself spanked.”


From an early age, his parents and teachers tried to teach him to feel compassion for the less fortunate.  We see him as a young child, handing out presents to the children of the Roosevelt household staff at Christmas, and accompanying his mother to hand out food to the poor.  Later at school at Groton, his headmaster reinforced the lesson of helping the less fortunate, and encouraged young Franklin’s interest in politics. Franklin even spent a summer working as a camp counselor teaching water sports at a camp for poor boys.


Krull portrays Franklin’s budding interest in politics, encouraged by cousin Teddy’s win as president.  He started out with class office at Harvard, and we see him at the beginning of his professional political career, running for the New York State Senate.  But FDR’s path to the White House was not straight--since he was stricken with polio at 39.  But this most active and athletic man was determined not to become a helpless invalid, and while “his legs had weakened and shrunk...just the opposite had happened to his mind.”  The book concludes with FDR, portrayed on his crutches, aiming for the White House.


The book’s back matter includes a brief essay on FDR as president, a timeline of FDR’s life and famous words, and a brief bibliography, with sources especially appropriate for young readers indicated.


Kathleen Krull’s sensitively written narrative is enhanced by Steve Johnson and Lou Fancher’s full page paintings, which have a nostalgic, old-fashioned feel to them that works well with the subject matter.  This would be an excellent introduction to FDR for young people, providing them with background on the youth and early career of one of our most admired presidents.
Posted by Fourth Musketeer at 11:32 AM