Book Review: Safekeeping: A Novel of Tomorrow, by Karen Hesse (Feiwel and Sons, 2012) 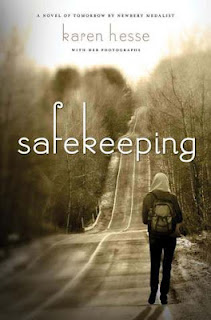 Karen Hesse is one of my favorite middle-grade novelists, and I particularly admire her historical fiction such as the Newbery-winning Out of the Dust, Stowaway, and Letters from Rivka.  So I must admit I was curious to see what she would do with the dystopian genre which continues to swamp the YA releases in the wake of the Hunger Games phenomenon.

I was not disappointed in Safekeeping, set in the near future in Hesse's home state of Vermont.  Seventeen-year old Radley, who lives a comfortable upper-class existence with her parents (her mom is a famous photographer) is working as a volunteer in a Haitian orphanage when all hell breaks loose in the US.  The president has been assassinated, the radical APP has taken power, and the government is cracking down on any dissidents.  When Radley arrives back in the US, she discovers she doesn't have the proper travel documents, her cell phone is dead, as is her credit card.  When she finally arrives home and finds her parents missing, she decides to flee to Canada--on foot--traveling largely by night, stealing food out of dumpsters to survive, and evading other travelers.  That is, at least until she meets a young girl traveling with her dog--the three of them join forces to travel to Canada and to try to make a new life there. Can they rely on the kindness of strangers?  And will Radley ever see her parents again?

Writing in the first person, Hesse blends her signature spare and poetic prose with a generous number of haunting black and white photographs, taken by the author, to create a riveting survival story of two young girls who learn to rely on each other, as well as anonymous strangers (an elderly woman farmer whom the girls dub Our Lady of the Barn).  They learn how little they really need in terms of material possessions, as long as they have companionship and love and someone to care for.  Throughout, Radley remembers her family and the orphans of Haiti, and ties their stories to her own.

I was somewhat disappointed in the last part of the novel, which I felt wrapped up the political upheaval in the US too easily, without allowing us to understand what had really happened and how the situation resolved itself.  However, since we are seeing the situation through Radley's eyes, the author might have felt that too much explanation of the political background was superfluous to the character development.

Still, this is an excellent novel--perfect to recommend to fans of The Hunger Games, the Among The Hidden series, and other dystopian books.

Posted by Fourth Musketeer at 12:47 PM

Hi, I am new to this blogging. Please give good blog like this. Keep posting like this.