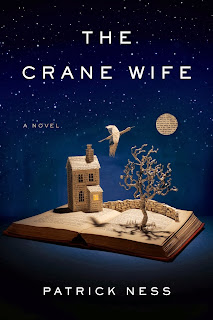 Are you a a fan of Patrick Ness' fantastic Chaos Walking YA trilogy, or his more recent children's novel, A Monster Calls?  I am, and therefore was excited to have a chance to preview his new adult novel, The Crane Wife (published in Great Britain in 2013, but due to be published here in 2014).  The novel is loosely based on a Japanese folk tale of the same title, (and is also a title of an album by indie band The Decembrists) but Ness' novel weaves its own unforgettable and unique spell of magic, yearning, love, and loss on the reader.

The main character, George Duncan, is a lonely, divorced middle-aged American living in the London suburbs.  He finds his life transformed when he is awoken one night to a mysterious keening noise--a noise like nothing he's ever heard before.  To his amazement he discovers in his back yard an injured enormous white crane, with an arrow shot through her wing.  Somehow George manages to free the arrow, and the crane flies away into the night.

The next day in his printing store, the mystery continues when a beautiful young foreign woman, Kumiko, comes into his shop, seeking help with her artwork, enigmatic cuttings that seem to be made from pieces of white feathers.  George falls hopelessly in love with her, and wants nothing more than to devote his entire self to her, but she remains an enigma, refusing to share with George the details about where she comes from and why she has come into his life.  Will she disappear from his life just as suddenly as she entered it?

In order not to spoil the magic of this story, I won't go further into the details of the plot.  Suffice it to say that the book mixes fantasy and reality in a bittersweet way.  Where the two intersect is up to you--what is real and what is make believe?  What is love?  Read this magical novel to find out more!