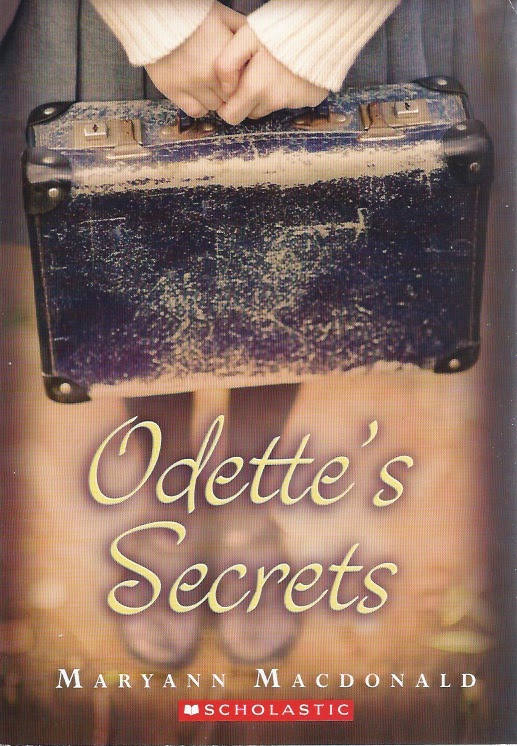 The Jewish holiday, Yom HaShoah, Holocaust Remembrance Day, begins on Monday night, April 28.  In honor of the millions who perished, as well as those who survived, I wanted to share with my readers an interview with author Maryann Macdonald of Odette's Secrets (reviewed here at the Fourth Musketeer last month).  This novel tells the story of a young French girl who was hidden during the Nazi occupation, and thus survived the Holocaust.  Thanks so much, Maryann, for visiting my blog today.

Q:  There are so many books, even for young readers, that deal with World War II, particularly the European side of the conflict.  Yet there are still so many stories to tell, with more books coming out every year.  Please tell us how you discovered the true story of Odette, and why you considered it important to tell her story to young readers.

A:   When I learned that 86% of French Jewish children survived the Holocaust by going into hiding, I was astonished.  How had these children managed to reinvent themselves so successfully, I wondered?  And how had it affected them?  Then, by chance, I found "Doors to Madame Marie," a memoir by Odette Meyers at the American Library in Paris.  I was so touched by Odette's story of her experience as a hidden child in France.  I especially loved her description of the struggles she went through with all the necessary deception that was required to stay successfully hidden, and the affect this had on her developing identity.  I had never seen a book that told this particular story about WWII, and I wanted to create a children's book about it for today's readers.  Although Odette had passed away some years earlier, I learned that her son Daniel was alive and living in Paris.  I called him and we met.  He told me he that his mother had often told her story in schools, churches and synagogues, and he was sure that she would want it to live on.  So I began the process of trying to recreate Odette's story for today's young readers.

Q:   Why did you decide to tell this particular story in free verse, rather than a more conventional prose style?

A:  My first draft of Odette's Secrets was in third person.  I wanted the story to be as accurate as possible, but I felt this version was too dry.  Then I remembered that Odette loved poetry, and even thought its beauty helped her to survive her ordeal.  She grew up to become a professor of literature, and wrote poetry of her own.  So I set about telling Odette's story in first person, in blank verse, to access more accurately Odette's childhood voice.  I wanted the book to seem as though Odette herself was telling her story to children.  This turned the book into fiction, but nearly every single recorded detail is true.

Q:  Many of your many prior books for young people are picture books rather than novels.  Did you ever consider telling Odette's story in a picture book format?

A:  I have written many picture books, but also one other middle grade novel and quite a few chapter books.  My latest effort is a young adult novel.  At first I thought Odette's Secrets might be a picture book, but there was just too much story to tell.  It is now slotted in for 10-14 year-old's, but I have heard from readers as young as 8.  One of my oldest readers was himself a hidden child.  He wrote to me to say he thought I had captured the experience quite accurately.

Q: In the current publishing climate, with the wild success of the Wimpy Kid series, dystopian novels like Hunger Games, and the continued popularity of fantasy series in the Harry Potter style, do you have any advice on how librarians, parents, and teachers can encourage children to explore historical fiction like Odette's Secrets?

A:  I have developed a teacher's guide for "Odette's Secrets," which is downloadable on my website, www.maryannmacdonald.com.  It offers many ways to draw readers into the book.    Obviously, linking the story with the history curriculum, with Holocaust Remembrance Day, and with National Poetry Month might help.  Not every book suits every reader, but Odette's Secrets has found many appreciative readers.  Fans of this genre can discover other great WWII books I've enjoyed, from picture books on up, on the "Odette's Secrets" FB page.

Q:  Can you share with us five children's books that made a big impact on you as a young person?

A:  Like so many young girls of my time,  I fell in love with the Little House Books, especially "Little House on the Prairie."  Now that I think of it, that series has some similarities with Odette's Secrets:  adventure, family closeness, life-threatening danger.  I read every book in our local library on pioneer life, too.  But I also loved books about England, especially "The Secret Garden," "Bedknobs and Broomsticks," and "Mary Poppins."  I think my love of English children's literature was partly responsible for the fact that when I grew up, I went to live in England for 23 years.  And again, like so many girls of yesterday and today, I loved Nancy Drew.  My granddaughter loves her, too.

Q:  What books are currently on your nightstand?  (or in your e-reader, if you prefer your books in that format?)

A:  I just read "The Hare with the Amber Eyes" with my book group.  I enjoyed that in paperback, but I LOVE my Kindle, too, and take it everywhere.  Now I live in New York City, so I get a lot of reading done on the subway, so take my Kindle everywhere in my handbag.  I'm reading "The Unlikely Pilgrimmage of Harold Fry" by British writer Rachel Joyce on it right now.   I also listen to books on my I-Pod while walking in Central Park and while cooking.  My latest cooking favorite is "The Hobbit" by Tolkein and my latest walking favorite is "City of Thieves," by David Benioff, about the siege of Leningrad.  Background reading gets fitted in at the library and just before bedtime.

Posted by Fourth Musketeer at 6:00 AM

Loved your interview! I didn't realize so many Jewish kids had managed to hide away safely during WWII. What a great story to learn more!

It's on my 38 Haunting Holocaust Books for Kids. I'd love to add your review too!

Thanks, I'd love for you to add it!