The answer you've been waiting for? Is she a cat or a girl? Hello Kitty Con Post #1

Off my usual blogging subjects, I am going to share some details of the first ever Hello Kitty con!

I was so fortunate to be able to attend the sold-out con going on in Los Angeles this weekend.  I love all things "kawaii" (Japanese for cute) and signed up for the convention as soon as I read about it on Sanrio's website.  I attended the press preview and VIP party (!) on Wednesday night (more on that to follow) and then went to the Con as a regular participant on Friday.  My favorite experience was an all-star panel  on Friday with Yuko Yamaguchi, Sanrio Tokyo’s head Hello Kitty designer, and fashion jewelry designer to the stars Tarina Tarantino. 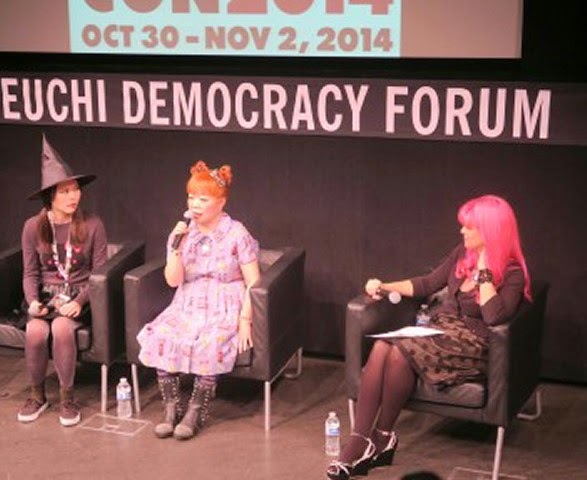 The two first met ten years ago at the time of Hello Kitty’s 30th anniversary, when Tarina designed her first Hello Kitty collection.  Tarina, looking suitably kawaii (cute) with her signature bright pink hair, told us that she discovered Hello Kitty in the late 1970’s when her grandparents brought her some small gifts from Japan decorated with the very simple but adorable cat.  Soon after, Hello Kitty went on sale in the US and Tarina reminisced about collecting Hello Kitty from a Bullocks (a now defunct department store) display when she was a girl in Los Angeles.  “I have to pinch myself” Tarina said, when she thinks that now she designs jewelry collections featuring the iconic figure.  She called Yuko her Japanese soul-sister and says she wants to play dress-up in Yuko’s closet some day when she is in Tokyo! 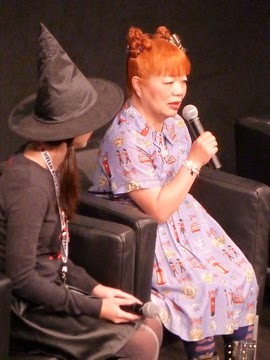 I furiously took notes during the panel so that I could share some of the fascinating accounts.  Here's some of the highlights...

Tarina: Could you tell us about the back story of Hello Kitty?

Yuko:  When I first met Hello Kitty in 1980, it was two years after I started working for Sanrio.  At that time Hello Kitty was not the most popular Sanrio character.  Even I didn’t think of Hello Kitty as a valuable asset.  At that time, Little Twin Stars was the most popular Sanrio character and dominated their sales.  Sanrio’s founder was concerned that Hello Kitty’s popularity was not growing, and was looking for a designer to take on the task of building her brand.  But no designer wants to be assigned to a character that’s not popular.  The Sanrio founder asked all the designers to present new designs for Hello Kitty.  I thought that the key to re-invent Hello Kitty was not the visual, but creating different stories.  According to Sanrio’s own newsletter, Hello Kitty dreamed of becoming a professional pianist, but you never saw her playing the piano, so that’s what I drew.  As a child I took piano lessons and had a grand piano at my home, so I imagined Hello Kitty had a grand piano.

I also imagined that Hello Kitty’s mom was a pianist, and her father must have a well-paying job to be able to afford that grand piano.  I presented the story of Hello Kitty and her family and then was told that I should be the Hello Kitty designer—not because I was the best artist but because I had the imagination and was willing to present my ideas, that’s why I was chosen.

There was a lot of pressure to develop a character that wasn’t popular.  I was talking to Hello Kitty every day.  When did Hello Kitty talk back?  I will never forget in the fall of 1985 she spoke back to me for the first time.  After five years she because the #1 character at Sanrio.  This is what Hello Kitty told me after five years:  “We did it!”  At that time I decided to take it up a notch, for her to be the #1 character in Japan.  But Hello Kitty didn’t say anything.  In the spring of 1997 many years later she became the #1 brand in Japan...

Hello Kitty has become another form of myself.  At that time I wasn’t sure if I was Hello Kitty or Hello Kitty was me.  I made a promise to make her the #1 character in the world!

Tarina:  On the question that has consumed portions of the Internet lately, as to whether Hello Kitty is a cat or a girl…

Yuko:  Since I met Hello Kitty, I thought of her as Hello Kitty.  She’s not a cat and she’s not a human.  I just want Hello Kitty to be a role model and the question as to whether she’s a cat or a human is not relevant.  But I can tell you for sure that Charmmy Kitty (Hello Kitty’s pet cat) is a cat.  Snoopy is a dog—because he only speaks the language of dogs.  So what’s Mickey Mouse?  I don’t think he’s a mouse, he’s Mickey Mouse.  So Hello Kitty is Hello Kitty and it is my wish to continue to nurture her as a very special brand.

Tarina:  What characters were you influenced by growing up?

Yuko:  As a child I loved Mickey Mouse and Disney.  I always wanted to go to Disneyland as a child but the US seemed much farther away in those days.  [When I finally went to the United States and visited Disneyland] I asked Mickey Mouse to autograph my passport.  I got into a lot of trouble with immigration!

Yuko concluded by saying that what she wants for Hello Kitty is not the life that Mickey Mouse lives.  "I want her to be a role model—a singer, dancer, and of course, pianist.  Then she can be an actress and win an Oscar." She also compared Hello Kitty to Lady Gaga!

More on the con (and more photos) to follow!
Posted by Fourth Musketeer at 8:51 PM