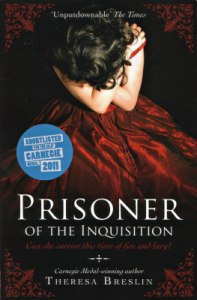 I don't usually order books from England before they are even available in the U.S., but when I read about Prisoner of the Inquisition in an article about England's prestigious Carnegie Award I couldn't help myself. Prisoner was short-listed for this year's Carnegie and won the Carnegie Shadowing Award (books chosen by young people who shadow the official judges and is written by a well-known author of historical fiction in her native Great Britain, Theresa Breslin.

One of my favorite historical fiction titles from back in my own teen days was Samuel Shellabarger's swashbuckling Captain from Castile, (adapted into a famous film with Tyrone Power), also set in the dark days of the Spanish Inquisition.  Scottish author Theresa Breslin's young adult novel focuses on some of the same themes of adventure, romance, revenge, and abuse of power by the church that I relished so many years ago in Shellabarger's novel.  In alternating chapters we meet two teenaged characters:  Zarita, the thoughtless, spoiled, only daughter of the wealthy town magistrate, and Saulo, son of a beggar.  Their lives intersect when Saulo's father, needing money to save his sick wife and hungry son, begs at the church where Zarita is praying, grasping her hand in desperation.  Saulo's father is soon cruelly executed for daring to assault Zarita, despite her pleas that the man does not deserve to die.  Saulo himself barely escapes the executioner's rope, and swears revenge on Zarita and her family.

Their stories are then told in parallel; Saulo is thrown into the harsh life of a galley slave, where through his wits, he is able to learn some navigation, is pursued by pirates, and eventually becomes acquainted with Christopher Colombus, a confident sailor from Genoa who hopes to gain patronage from the Spanish monarchs to explore an alternate route to the Indies.  Zarita, on the other hand, has troubles of her own.  The Inquisition has come to her town, and with it fear, suspicion, and cruelty.  No one is immune from the Inquisitor's tactics, even Zarita's aunt, a nun, a simple-minded relative, and Zarita herself.  Soon Zarita and Saulo's lives will intertwine again, in a way neither of them could ever have suspected.  Can they escape the dangers of the Inquisition?

I thoroughly enjoyed this historical novel about one of the darkest periods in Spanish history, although I found the transformation of Zarita's character from a self-absorbed young girl who thinks nothing of a poor beggar in the church to a kind, sensitive young woman a bit difficult to believe.  Some of the other characters in the book, including Zarita's young step-mother, are also somewhat one-dimensional, but the novel effectively captures the spirit of the period and is well worth reading.  I hope it will soon be released to an American audience.

Teens looking for other novels about this dark period in history may want to check out Alice Hoffman's Incantation (Harper Collins, 2004).
Posted by Fourth Musketeer at 5:00 AM