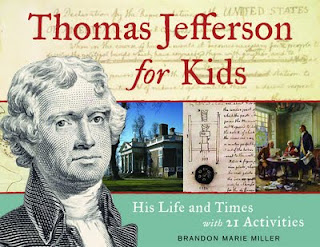 This new release from Chicago Review Press about Thomas Jefferson, one of the most venerated of our founding fathers, is a great addition to any school or public library, as well as ideally suited for  use by home schoolers.  Although many biographies of Jefferson are available for young people, this one is unique in including a variety of hands-on activities to enhance learning, from how to organize your library like Jefferson, how to observe the weather, grow a plant from a cutting, or paint a buffalo robe.  Although I did not try any of the activities, they include copious instructions, and are well suited for upper elementary and/or middle school students.

Organized chronologically, this book begins with some background on Jefferson's father, Peter, and his wife Jane.  Thomas was the first of their eight children, and showed himself to have a quick mind from his earliest childhood.  Jefferson went on to be a brilliant college student, often studying 15 hours a day (and without a tiger mother!), and then studied law.  We learn about Jefferson's immersion in radical politics, his family life, and his drafting of the Declaration of Independence.  Later chapters explore his presidency and his founding of the University of Virginia, as well as recounting the incredible story of his death on the 50th anniversary of the Declaration of Independence--the same day as his friend and rival, John Adams, also breathed his last.

Miller's volume is clearly written, and provides a fascinating look at this complex individual and his wide range of accomplishments and interests.  I particularly appreciated that she does not shirk from analyzing Jefferson's many contradictions, which she summarizes as follows:  "A man who believed in frugal government yet lived his own life burdened by debt.  A man who hated kings and privileged nobles yet lived as an aristocrat himself.  A man who believed passionately in freedom and liberty yet owned slaves who toiled for his comfort."

It is the last of these contradictions which is most difficult for us in the 21st century to come to terms with.  Although Jefferson recognized the evils of slavery and even condemned slavery in the first draft of the Declaration of Independence, these remarks were removed in one of 86 changes made by Congress.  Slavery, though, was deeply engrained in Jefferson's consciousness; he grew up in a slave-owning household, and inherited his first slaves when he turned 21.  Miller includes in her book an advertisement Jefferson placed to recover a runaway slave, describes what is known of his relationship with Sally Hemmings, including discussing the many children she bore him (a new historical fiction novel for young people, Jefferson's Sons, by Kimberly Bradley, comes out in mid-September, and will be reviewed here at The Fourth Musketeer later this fall).

This volume is greatly enhanced by an abundant use of illustrations, including many full page reproductions of paintings, photographs, maps, and drawings.  The large format of the book and generous use of white space make the text easy to follow, and the author makes good use of many sidebars for further explanations of different topics in Jefferson's life, from his slave Jupiter to the Hemming family to political explanations of events such as the Sedition Act.

Back matter includes places to visit and websites to explore, further reading for young people, a selected bibliography, and a detailed index.  A timeline of Jefferson's life is also included, as is a note to readers explaining how primary sources from Jefferson's life can include different spelling, grammar, and punctuation from what we are used to today.

I am delighted to offer a copy of this book as a giveaway to my readers.  To enter to win a copy of this volume, please leave a comment below with your e-mail address so I can reach you if you are the winner.  U.S. only please.  A winner will be selected on September 15, 2011.

Those who plan trips to Washington D.C. may be interested in the just-announced news that the Smithsonian will be collaborating with Monticello on a new exhibit examining Jefferson's interaction with slavery.  "Jefferson and Slavery at Monticello:  Paradox of Liberty" opens January 27 at the National Museum of African American History and Culture gallery in the Smithsonian's National Museum of American History.

Looks great! Count me in for the giveaway!

Sounds like an interesting book. I appreciate it when history books take the time to look at both the talents and flaws of the founders. Great men, yes, perfect, no.

Thanks for hosting a giveaway.
hg195 at yahoo dot com

This sounds like the perfect book for children. Thank you so much for this giveaway. I am always fascinated by History in general and this is perfect for the Holiday.

This looks great. I'd love to win a copy. Email: beckylevine at ymail dot com.

I would love to be entered for this for my son. misusedinnocence@aol.com

Thank you very much for reviewing Thomas Jefferson for Kids! I appreciate it! Two activities from the book are posted at http://hands-on-books.blogspot.com
Sincerely,
Brandon