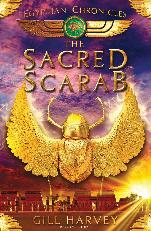 The Historical Association in Great Britain has just announced its Young Quills awards, given to historical fiction from the previous 12 months aimed directly at children and teens.  There are two categories of awards:  one for primary (under 12 years) and the second for teens (12 and up).  This year's winners are:
Primary category:  The Sacred Scarab, by Gill Harvey (Bloomsbury), part of The Egyptian Chronicles, a series of "gripping thrillers" set in ancient Egypt.  I don't believe this series is available in the U.S.--doesn't it look great?  Love that cover!
Teen category:  Prisoner of the Inquisition, by Theresa Breslin (Doubleday).  This story of the Spanish Inquisition was reviewed recently here at the Fourth Musketeer.
Like our state young readers awards here in the U.S., the short-list for these awards were chosen by schoolchildren in Great Britain.  I really appreciate the criteria that are used to establish the short list:
The complete shortlists for both categories can be found at the Historical Association's website.  I was pleased to note that I had reviewed four of the six teen finalists on this blog.
Posted by Fourth Musketeer at 5:00 AM