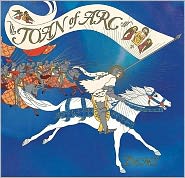 Joan's story is told chronologically, beginning with her ordinary girlhood in rural France, in a time when the lives of peasants like Joan's family were made dangerous by the ravages of a long war with Burgundy and England.  At the tender age of thirteen, Joan begins to have visions telling her that she would save the kingdom of France by leading the heir to the throne, or Dauphin, to Reims Cathedral to be crowned king.  The story of how Joan convinced powerful men to back her, a poor and friendless maiden, convinces the Dauphin she is sent by God, leads the French army to victory, and then falls from the height of power to her ultimate tragic end as she is burned at the stake, remains compelling for all ages, and is rendered in glowing detail by Demi.  The oversized book's pages mimic the ivory colored parchment of the Middle Ages, while the illustrations seem to glow with gold, vibrant purple, and the red of the flames that ended Joan's life.  While the faux illuminated manuscripts are the star of this book, with exquisitely detailed borders enriching each image, Demi's simple retelling of Joan's story should fascinate young people not familiar with her history.  Enough details are provided to make the book useful for school reports as well as pleasure reading.

This book is a must-buy for school and public libraries alike.  Highly recommended!
Posted by Fourth Musketeer at 5:00 AM

I'm listening to a fascinating audiobook at the moment Mere Mortals by Jim Leavesley, which is basically speculation on the diseases of famous people from history. The Joan of Arc section was definitely the most fascinating by far, and I've been very interested to learn more about her. I borrowed two older books from my library, but I shall definitely keep an eye out for this one- it sounds great. Oh why is internet shopping so easy? I just ordered a copy online......

Joan of Arc was one of my favorite biographies when I was young. I would love to read her story again. The illustrations sound magnificent!