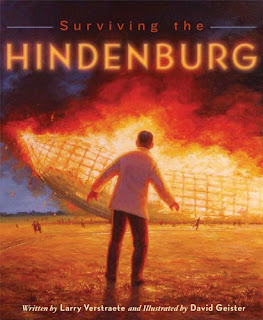 With the seemingly infinite number of books about the Titanic being released this year, it was refreshing to read an account of another famous disaster of technology, the crash of the mighty luxury airship the Hindenburg in 1937. Told from the point of view of Werner Franz, a 14-year old cabin boy serving on the vessel, this handsomely illustrated picture book shows Werner's life on board the luxurious vessel as the ship prepares to land in the United States on its three day journey. But while Werner puts dishes away in the kitchen and the Hindenburg crew prepared for the landing, something goes terribly wrong, and suddenly Werner finds himself alone in the bow of the ship, with a giant fireball behind him. Can Werner escape the inferno?
This exciting tale is well captured in this picture book for older readers. The author includes both a preface and an afterword, which gives information on other survivors, more on what happened to young Werner, and Hindenburg memorials.
This book is written by Larry Verstraete, a former teacher whose enthusiasm for his subject is evident.  The larger-than life painted illustrations are by historical illustrator David Geister.  The oversized format of the book effectively captures the immense scale of the airship and the horror of the disaster.
This book would be particularly appealing to fans of steampunk, who might enjoy learning more about an actual airship.
Recommended for upper elementary school students.
Posted by Fourth Musketeer at 1:38 PM

Email ThisBlogThis!Share to TwitterShare to FacebookShare to Pinterest
Labels: 1900-1940, picture-book

I also enjoyed reading this book and learning history anew through the eyes of the cabin steward. Though the crash site is located on a military base, with some advance planning, a tour can be arranged. http://www.nlhs.com/nlhstours.htm I think I may check it out one day soon.

Looks like a Very nice graphic novel - I'm not sure what you mean by large format. Is it a coffee-table sized book?