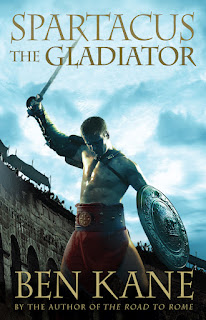 Posted by Fourth Musketeer at 8:41 AM

Thanks so much for taking part in the tour. I'm glad you enjoyed the book.

Sounds like a great read and I enjoyed the review.
GFC follower @Jeanne
:)Jeanne B.T.
jeannebates_t@yahoo.com

Good luck, Jeanne, and I hope you enjoy the book!

Look like a great read and I'm glad ancient Rome is back in fashion!

Have you seen the Simon Scarrow Fight for Freedom? It is middle grade and does not have the swearing or sex that a lot of the books have. I will have to order two copies because it was really good.

Hi.,I looked your blog it was really mind blowing article,I really enjoyed this articles.But you people share little things only.But it is not enought informations to us.Thanks for sharing.
seo consultants