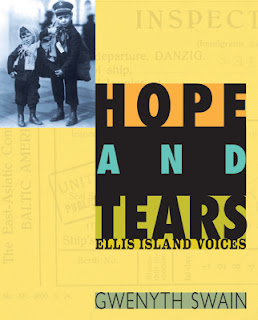 Recommended for ages 9 and up.

Author Gwenyth Swain brings stories of Ellis Island vividly to life through text and photographs in the beautifully rendered Hope and Tears:  Ellis Island Voices.  She uses poetry, monologues, and dialogues combined with a selection of archival photographs to help us imagine Ellis Island at various stages of its existence, beginning in the late 1500's with a poem by a native Lenni Lenape boy.

Prose introductions provide background on each period of Ellis Island's history, from the processing of its first immigrant in 1892 to its busiest period in the early 20th century and beyond.  In moving free verse, Swain chronicles all aspects of Ellis Island's life, from the arrivals, complete with their hopes and dreams, to the dreaded inspections, in which families could be separated and detained in hospital's on the island or even sent back if they were deemed "likely to become public charges."  She doesn't forget the various workers on the island, from the nurses and aid workers to the clerks, cooks, and Salvation Army volunteers, who are pictured handing out doughnuts to hungry immigrants.

In the 1920's, when Congress put limits on immigration, Ellis Island became a place mostly used for deportation rather than immigration, and eventually was abandoned after 1954.  But in the preparation for the nation's bicentennial, interest in Ellis Island as an important historical landmark surged, and in 1990, after many years of renovation and fundraising, the island reopened as an immigration museum. Additional poems mark this more recent period of Ellis Island's history as well, ending with a poem from a National Park Service employee, who remarks about the many visitors:

This book would be perfect for a class performance as part of a unit on family history and immigration.  There are many parts for boys and girls and only simple costumes--or no costumes at all--would be required.

Back matter includes source notes, a bibliography which includes websites, films, books, articles, and interviews, an index, and suggestions for going further in exploring the themes of this book.  Swain's website will also offer an extensive teacher's guide (available soon).
Posted by Fourth Musketeer at 5:00 AM

What an interesting book. My father was one of the last people to enter this country through Ellis Island and I remember him telling me about it. I will have to look for this book.

I just posted on chapter books for 4th grade immigration unit. I'll include this with a link to your post. Thanks!

So many people make sure children understand about & recognize The Statue of Liberty. Ellis Island should also be on our radar as we talk about this country's role in welcoming people of the world. Brava Gwenyth Swain & thanks Margo for the post.

This is a great post; it was very informative. I look forward in reading more of your work. Also, I made sure to bookmark your website so I can come back later. I enjoyed every moment of reading it.