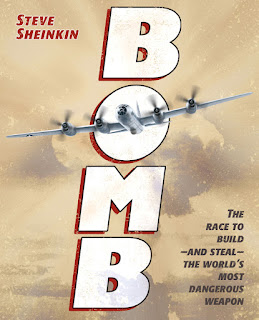 Recommended for ages 10 to adult.

Although I love to read nonfiction, particularly about history, I can't say there are many books in this genre that I literally can't put down until I finish them because I am so engrossed in the story.  Steve Sheinkin's latest work, Bomb:  The Race to Build--and Steal--the World's Most Dangerous Weapon, was one of those I drag to the bathroom with me.  He makes the reader feels as if he or she is reading the newest thriller from James Patterson or Lee Child.  Even adults are likely to find this book riveting, and it's a real winner for middle school or high school readers with an interest in history, spy stories, or technology.  And last week, Bomb was one of 5 YA books nominated for the National Book Award!

Sheinkin likes to call himself a "recovering textbook writer," blaming the boring history textbooks used in schools for so many young people's dislike of history as a subject.  He has, however, more than atoned for writing boring textbooks with his highly readable nonfiction works for kids, including The Notorious Benedict Arnold (Flash Point, 2010).

His newest masterful work of narrative nonfiction tells three simultaneous stories:  American physicists realize the potential bomb-making power of atomic fission (splitting atoms in two) and with the backing of the US government, set up a top-secret research institute in an isolated campus in New Mexico to try to build--and test--an atomic bomb before the German physicists develop one; the Soviets try to steal the bomb from the Americans; and the Allies try to sabotage the German bomb project.  It features a cast of colorful characters that no one could make up, complete with dozens of story lines organized by Sheinkin into a "cinematic style thriller."  It's full of details sure to be fascinating to young people--i.e. did you know Oppenheimer's parents, worried about their very geeky and brilliant son's social skills (or lack thereof), sent him to sports camp, where he was mercilessly bullied by other campers?

Sheinkin consulted a impressive variety of sources for this book, and back matter includes detailed source notes that are organized by bomb race sources, character sources, and primary sources.  Photo credits, quotation notes, and an index are also included.   Check out an interview with Sheinkin about this book from School Library Journal.  You can listen to Steve introduce his book and read an excerpt from it at the following link.

On another note, if you're a fan of Sheinkin's nonfiction, you should try out his hilarious graphic novels about Rabbi Harvey, a rabbi in the Wild West. 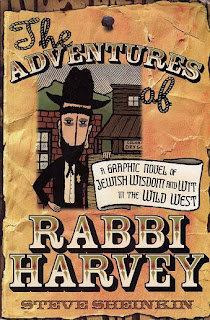 Posted by Fourth Musketeer at 7:35 AM

There is also a literature unit based on this book for teachers. It is geared toward high school English or social studies classes and is based on Common Core standards. It can be found at Curriculum Aids or on Amazon.