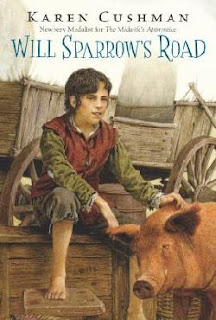 Newbery-award winning novelist Karen Cushman is an expert writer of historical novels for youth, and is particularly drawn to tales set in "merry old England."  I use this phrase a bit ironically, since one of the features of Cushman's writings is that she does not shirk from describing the hardships of life at that time, particularly for those children in the lower classes.  Her newest book differs from all her past novels by featuring a boy as a protagonist rather than her usual feisty girl heroines.

The novel opens by introducing its hero as follows:

"Will Sparrow was a liar and a thief, and hungry, so when he saw the chance to steal a cold rabbit pie from the inn's kitchen and blame it on the dog, he took it--both the chance and the pie."

We learn that Will, not yet thirteen, has had a hard life, having been sold by his father to the innkeeper for free ale.  With the threat of being once again sold to London to be a chimney sweep, Will runs away, preferring the dangerous life on the road, in which he must scrounge for food and some kind of shelter from the cold,` to a sure early death as a "climbing boy."  What kind of future faces our hero, besides an empty belly?

Will meets up with all kinds of colorful characters on his travels in Elizabethan England, including a quack of a doctor who recruits Will to serve as his stooge, a blind juggler, and a cranky dwarf, and quickly learns to trust no one. Will manages to attach himself to a group of entertainers who perform at fairs, an Elizabethan freak show that includes a unicorn skull and a sea monster.  He even makes a few friends, including Duchess, the world's smartest pig, who performs tricks and even is learning to understand French, her owner, Samuel Knobby, and Grace, a young girl with a hairy face who is billed as a live monster in the show of wonders.  As we might expect in a book for young readers, Will, who is friendless and penniless at the beginning of the tale, ultimately finds a family of sorts, one of his own choosing, among the misfits of the fair.

I have to say that this was not among my favorite of Cushman's novels; the story simply didn't engage me the way Midwife's Apprentice, The Ballad of Lucy Whipple, and others of her work have.  I'm not sure exactly why, but I think that the story is not paced as well as some of her other books and I was not as drawn to the character of Will as to some of her earlier protagonists.  As always, however, she is skilled at creating an authentic historical setting, and the reader is drawn into the world of the Elizabethan fair, including its smells and sounds.  She liberally sprinkles her text with Elizabethan-sounding phrases, such as "certes" to provide some local color as well.

While this book is likely to appeal to those youngsters who are drawn to historical stories, I would be more likely to recommend others of Cushman's titles to a young reader before this one.
Posted by Fourth Musketeer at 9:38 AM

I find stories about hardship for kids due to poor parenting to be so sad that it makes it difficult to for me read. Poor Will and what a terrible father and lesson to learn about the harshness of the world.