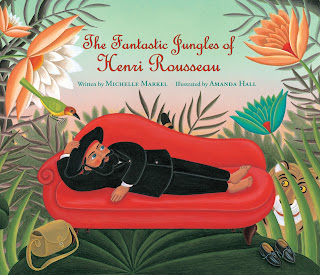 Recommended for ages 6 and up.

As an art history major in my former (and more and more distant!) college days as well as a lover of children's literature, I am inevitably drawn (no pun intended!) to picture book biographies of famous artists.

The life and art of French artist Henri Rousseau are vividly brought to life in a recent release by author Michelle Markel and illustrator Amanda Hall.  Rousseau is best known for his post-impressionist paintings depicting jungle scenes, although he never left France.  Rousseau, we learn from Markel's succinct yet poetic text, wants to be an artist, even though he is 40 years old, a toll collector, and has never had any art training.  "Why?  Because he loves nature.  Because when he strolls through the parks of Paris, it's like the flowers open their hearts, the trees spread their arms, and the sun is a blushing ruby, all for him."

With no money for art lessons, Rousseau studies the paintings at the Louvre, photographs, illustrations, animals at the zoo, and leaves, plants and flowers from the local botanical garden, where he is particularly enraptured by the tropical plants.  Although his work is ridiculed by the art critics, Henri perseveres, spending all his money on art supplies and supplementing his income by giving music lessons.  Although the art establishment continues to belittle his work, several younger artists, including the already well-known Picasso, eventually recognize his talent.  Now, of course, his paintings are in museums world-wide, and he is recognized as an artistic genius.

The illustrations by Amanda Hall pay tribute to Rousseau's "primitive" style, with its flattened shapes, vivid colors, detailed leaves and plants, and unusual perspective.  Many of the illustrations draw directly on Rousseau's paintings for inspiration, and adults will recognize some of his most famous works such as "Sleeping Gypsy."  Even the endpapers echo Rousseau's easily recognizable style, with its jungle leaves, flowers, and animals.  To better emulate the feel of Rousseau's paintings, Hall worked in watercolor and acrylics.  She also incorporates some of his famous friends into her illustrations, and in the afterword a key is provided to see who is who in those spreads.

I would have liked to see some reproductions of Rousseau's actual paintings in the afterword, but these can easily be found online for those who would like to explore further the fascinating works of this self-taught artist.

Posted by Fourth Musketeer at 9:05 AM

What a gorgeous looking book. I am also 'drawn' to picture book biographies particularly those of artists/musicians/dancers/writers. We are actually thinking of doing a theme on creatives, maybe for 2013. :) Thanks for sharing this book.