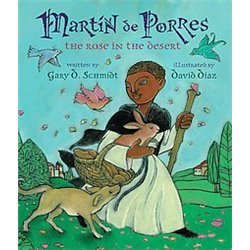 Newbery-honor winning novelist Gary D. Schmidt and Caldecott-winning illustrator David Diaz together have created a beautiful and moving portrait of Martin de Porres, a 17th century Peruvian saint.  I was completely unfamiliar with this remarkable individual, an illegitimate child both to a former African slave and a Spanish conqueror.  He grew up in poverty until the age of eight, when his noble father came from Ecuador and took Martin and his sister Juana back with him to raise.  Later apprenticed to a doctor-barber, Martin showed a talent for healing and a religious calling.  But the local prior, prejudiced against Martin's dark skin, would not let him to train to be a priest.  Instead, he became a servant at the monastery.  Martin's talent for healing dogs and befriending animals of all kinds began to be known, and the local people as well as the monks soon began to ask Martin to doctor them.  Eventually he was allowed to take vows as a priest, and he continued to work miracles as the "rose in the desert."

Schmidt's lyrical text and Diaz' beautifully realized illustrations combine to make this a stellar offering for those looking for inspirational stories about saints or other religious figures to share with their children.  Diaz illustrations are rendered with a flat, stylized method and are colored with rich, jewel-like tones.  Many of the illustrations have a dream-like quality suited to rendering the miracles described in the text.

Like Saint Francis of Assisi, Martin was known for his work with animals and with the poor.  Unlike Saint Francis, however, Martin came from an underprivileged background himself.  A brief Author's Note tells the reader that Martin was made a saint in 1962, the first black saint in the Americas.  He is now known as the patron saint of interracial relations, social justice, those of mixed race, and animal shelters.
Posted by Fourth Musketeer at 5:00 AM