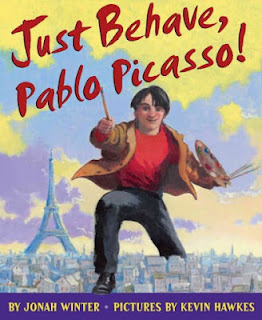 Those looking for an attractive book on Picasso for young readers should check out Jonah Winter's picture book, Just Behave, Pablo Picasso!, released in February of 2012 and illustrated by the versatile Kevin Hawkes (I'm a big fan of The Wicked Big Toddlah, Library Lion, and A Pig Parade is a Terrible Idea, among others).  This book focuses on the early years of Picasso's career.  In a highly creative and appropriate opening, the first 2-page illustration shows a bucolic country landscape, a peaceful scene with hills, cows, blue sky and puffy white clouds.  But turn the page, and "BLAM!",  the young Pablo is depicted literally bursting through the canvas, almost like a superhero artist, paintbrush in hand.  Winter and Hawkes together capture the magnetic force of Picasso's creative personality, with a lively text suited for students in elementary school.  Many will identify with Picasso's rebellious personality, as he skips from one style to another and one country to another in what seems a blink of an eye (or in this case the turn of a page).  Actual paintings of Picasso, listed at the end of the book, are worked into Hawkes' illustrations, while Picasso's contemporaries proclaim in cartoon-style text bubbles their opinions of Picasso's work.

We see Picasso's style evolving to become ever more abstract, and share in the shock of the crowd at the exhibition of Les Demoiselles d'Avignon, now considered one of his greatest works.  But despite his early success, Picasso refuses to stay still artistically, and disdains his neighbors, who shout collectively at him during one very funny two-page spread, "Just behave, Pablo Picasso!", as they point their fingers at him.  Picasso, of course ignores them, becoming a "force of nature...the most original artist of his time."

This book would fit very well into a discussion of creativity and different ways of seeing the world, as well as promoting discussion of perseverance in the face of criticism.
Posted by Fourth Musketeer at 5:00 AM

I love how the book depicts Picasso as a very charismatic leader ... not what you'd typically think of an artist. Sounds like a biography that kids can relate to!

I like to include a picture book in book talks and selected this one for middle school students and a lively discussion about persevering and overcoming negativity followed. I recommend it!