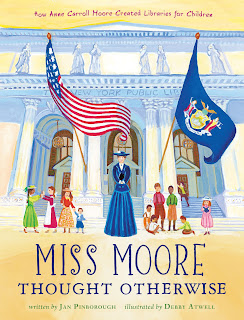 In her debut book for children, author Jan Pinborough offers a charming picture book biography of Anne Carroll Moore, an individual not well known among the general public but whose advocacy of library services for children are worthy of being celebrated in this handsome new volume released just in time for Women's History Month.

The book begins almost like a fairy tale:  "Once in a big house in Limerick, Maine, there lived a little girl named Annie Carroll Moore.  She had large gray eyes, seven older brothers, and ideas of her own."  We soon learn that Annie is a bit of a rebel, not content to do what a girl was supposed to do in those days.  She loved books, but in those days children weren't allowed in the library.  When she grew up, she went to New York City on her own to enroll in library school, and soon went to work in a library where they had something brand new--a room just for children, where Annie even read aloud to them.  An advocate for children, she later became head of the children's rooms at the New York Public Library's many branches.  At this time, children weren't allowed to take books home, since the librarians thought the children wouldn't bring them back.

Pinborough portrays Anne Carroll Moore's feisty personality with a constant refrain in the book:   "Miss Moore thought otherwise."  When a grand new central library was built in the city of New York, Miss Moore was responsible for creating and designing the special place for children, complete with child-sized furniture.  She brought authors, musicians and storytellers to entertain the children, and entertained them herself with her special doll Nicholas Knickerbocker and stories of his life.  Even when she retired, she continued educating librarians across the country on how to create wonderful libraries for children.

Back matter includes more details about Miss Moore, the "trailblazing librarian," and a list of sources.

The lively artwork by Debby Atwell, executed with brightly colored acrylics in a folk-art influenced style, is a wonderful match for Pinborough's breezy writing style.   Every children's librarian will want to have a copy of Pinborough's tribute to this remarkable woman on his or her shelf.  She was a true hero for librarians and children everywhere!  Check out the special website devoted to the book, an interview with the illustrator, Debby Atwell, at Kidsbiographers Blog, and watch for a special post by Jan Pinborough on Kidlit Celebrates Women's History Month on March 7!

Posted by Fourth Musketeer at 6:54 AM

We would love to read this book. Can't wait to see the lovely artwork inside too. The cover looks very nice indeed.

Everyone on nonfiction Monday had the voolest picture books about women's rights. This looks fabulous. Will have to read it, even though I don't really need picture books!

Loved hearing about Moore -- thanks for the nice review and the heads up about Jan's post this week :).

You had me at "created libraries for children". Thanks for posting about this one.

I love librarian heroes!! Most are, of course!