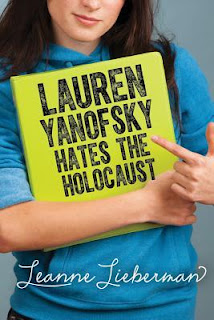 "Some kids got Disney.  I got Hitler."  No way could I NOT read this book after reading that line on the back cover--and the title intrigued me as well.

The novel's protagonist, Lauren, doesn't want to be Jewish any more.  It's not that she wants to be a different religion--she just wants to be a "non-Jew by choice."  She grew up going to Jewish day school; her father's a Holocaust historian.  At her house, she quips, every day was Holocaust Remembrance Day.  Family vacations (instead of going to Disney World like other people) revolved around trips to Holocaust memorials. "Why would anyone want to belong to a religion that was all about loss, grief, and persecution?" she muses.

Lauren manages to convince her parents to send her to the public high school.  But even there--where incidentally they have a much better basketball team for Lauren to play on--she can't escape the legacy of the Holocaust, however much she might try.  When she sees some of her friends--including Jesse, a boy she likes--playing Nazi war games, she is confronted with a dilemma.  Should she betray her friends, and risk being a social pariah at school, or betray her heritage, by remaining silent?

While in many ways this is a "typical" teen novel with boyfriend and friendship drama, Lauren's struggle with her heritage is described in an entertaining and also thought-provoking way that make the novel highly readable for teens.  Jewish young people are likely to be particularly attracted to this novel, particularly because of the intriguing title!

I'm so intrigued by this one after reading your review. Looks great!

Love the sound of this book! So great for middle school kids trying to figure out their identity! You don't have to be Jewish to relate to wanting to change your ethnicity as a way to explore who you are.

Thanks for the great review. I'm so glad you liked the book.