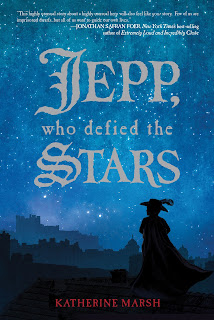 I'm fascinated by the character of Tyrion Lannister, the cunning dwarf in Game of Thrones.  You don't find a lot of literature with a dwarf as one of the heroes (or perhaps in Tyrion's case, an anti-hero).  Perhaps my interest in Tyrion is why I picked up this book by Katherine Marsh about a teen-aged dwarf in 16th century Europe, but Jepp's story quickly engaged me on its own terms.

Jepp is living a relatively happy and protected life at his mother's inn in the countryside, until a wealthy courtier appears and invites him to a life of luxury Coudenberg Palace, the home of the Spanish Infanta.  There he joins a small group of court dwarves, and Jepp is shocked when he realizes that he is to be a pampered pet, fed morsels at the dinner table and popping out of pies.  Jepp plots a daring escape for himself and his dwarf friend, Lia, but is soon recaptured and sent away to another court, that of a Danish nobleman, Tycho Brahe.  His new master is fascinated by the science of the stars, including astrology.  Despite his dwarf size, Jepp is no fool, and would like to be part of the learned world of the scholars.  Can Jepp change his own destiny or is he fated to always be controlled by others?  How will he find his way in what often is a cruel world?

The author states that she was inspired to write this novel through her fascination with the famous paintings of court dwarfs by Spanish painter Diego Velasquez.  As she explains in an author's note, Jepp was an actual dwarf who served as court jester at the court of Tycho Brahe, but very little is known about him.  Although his story is largely invented, the life of court dwarfs was carefully researched by the author and seems to be accurately portrayed.  Marsh was also inspired by her mother's passion for astrology, which plays a central role in this story.


If you're tired of dystopian and fantasy YA novels, I highly recommend this book! Marsh's book was honored as a New York Times Notable Children's Book of 2012 and also by The Wall Street Journal's Best Children's Books of 2012.  It definitely stands out among the crowd of books that all seem to look the same these days.  Even the handsome cover and design of this book are unique, with the end papers decorated with a beautiful astronomical chart that depicts, instead of constellations, various elements of the story.   It's a unique coming of age story, with a beautifully rendered and written story, which transports us to another time and place in the way which good historical fiction can do just as well as fantasy.  Being a YA novel, there's even a bit of romance involved.

In addition to the above-mentioned Author's Note, back matter includes an interview with the author.

Nice to see dwarves in non-fantasy settings -- as humans, rather than fantastic characters akin to elves and hobbits.

Not my usual read but everything about this is intriguing.

Sounds like a good summer read - thanks for the suggestion!

Sounds wonderful! I am sick of dystopian YA.