Blog Tour: Vicki Wittenstein and FOR THE GOOD OF MANKIND? and giveaway! 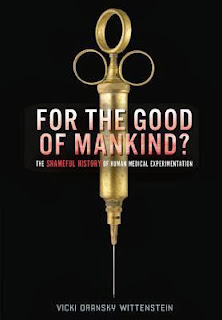 It's my pleasure to welcome to my blog today author Vicki Wittenstein, whose new book, For the Good of Mankind? tells the difficult but important history of human medical experimentation in a format suitable for middle school or high school students.  With the onset of the Common Core, Wittenstein's book is exactly the type of well-researched, provocative, and stimulating narrative non-fiction that teachers and libraries will be needing to put into students' hands.  Vicki was kind enough to answer some questions about her new book for The Fourth Musketeer.

Please leave a comment below with your e-mail address for a chance to win this fascinating new book!  (U.S. and Canada only, please)

1) What made you interested in writing a book for young people on the challenging topic of human medical experimentation? 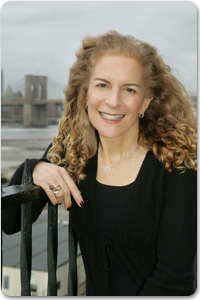 Before writing for children and young adults I was an Assistant District Attorney in Manhattan. Injustices have always angered me, particularly when powerless people are taken advantage of, whether because of lack of education, poverty, mental capacity, race, sex—or as in the case with human medical experimentation, all of the above. The past ethical abuses of human medical experimentation inflicted pain, humiliation, and even death to so many people without a voice. I wanted readers to hear the voices, debate the issues, and never forget about these people.

I also enjoy writing and teaching about history. A discussion of human medical experimentation necessitates following a span of hundreds of years, from ancient times to the present.  So readers can absorb important historical events throughout time. But alongside the facts, they can also gain an understanding of how society’s ethics and morals reflected the time periods and changed accordingly. For example, the brutal and inhumane experimentation of African Americans during the nineteenth century would not have occurred without the institution of slavery.

How can society learn from past mistakes? How will readers face present day ethical challenges, not only in science and medicine, but in whatever field they pursue? These are the questions I continue to think about and that inspired my writing.

2) In your book, you discuss the early history of medical experiments on humans, including research on slaves, children, prisoners, soldiers, and others.  Many of these stories will surprise contemporary readers.   Was there a particular experiment that you learned of during your research that you found most shocking?

Before researching the book, I had no idea about the secret U.S. government radiation experiments that occurred during the Cold War. Manhattan Project scientists furiously at work developing the atomic bomb didn’t understand the effects of radiation on the human body. They authorized hundreds of secret experiments on unknowing people. I was very disturbed by these experiments. Manhattan Project physicians injected plutonium into eighteen people who randomly ended up in hospitals under their care. Imagine how betrayed you would feel if you were one of those people or a family member! Hundreds of pregnant women at a Vanderbilt University clinic drank a tonic they thought was good for their unborn babies, but turned out to be laced with radioactive iron. And the list of abuses goes on . . . .

3) How would you compare the medical experiments done by Nazi physicians in the concentration camps to human medical research before that time?

Earlier experiments in the U.S. were most often part of a general quest for understanding.  Doctors were desperate for cures and treatments for deadly diseases, like smallpox and polio. That being said, though, doctors often pushed the boundary between ethical and unethical practices, and many people were harmed.

In the nineteenth century, African American slaves were often bought just for the purpose of experimentation, and they suffered tremendous pain and humiliation. It’s incredibly difficult to even fathom this kind of degrading and inhumane treatment. And without a doubt, we continue to bear the scars in our collective conscious.

Yet, as tragic as many of the experiments were before World War II, the Nazi horrors raised the bar on inhumanity to unprecedented heights. Earlier medical experiments in the U.S. were never part of a government-sponsored program to annihilate an entire group of people. The Nazi goal of exterminating all the Jews and other so-called “inferior” people granted doctors the freedom to do whatever they pleased with concentration camp inmates. In fact, as far as the Nazi doctors were concerned, dead bodies were often more useful than live bodies:  cadavers then could be dissected to observe the ravages from experimentation.

4) You point out in your book that despite legislation to protect the rights of human subjects, there are many possibilities for abuse, particularly in research done by American companies abroad, where there are typically fewer safeguards.  After your research, do you feel the whole system is fundamentally flawed because it relies on the profit motive?

No question about it, the profit motive is a big issue. Pharmaceutical companies experiment abroad because it’s cheaper and because government officials don’t monitor clinical trials as closely as they do in the U.S. But I don’t think the system is fundamentally flawed.

The hallmarks of the Common Rule require that subjects give voluntary and informed consent, that experiments maximize the subjects’ benefits and limit their harm, and that subjects represent a diverse range of the population. Researchers are required to balance the individual’s right to be free from harm with the need for medical advancement. So ethical conduct hinges on how researchers and companies interpret and follow the enacted legislation and how the research is monitored. Fairness rests in large part with the companies who conduct the research, the Institutional Review Boards who authorize and set guidelines, and the watchdog government agencies. Given the thousands of clinical trials conducted every year, it’s amazing that the system even works as well as it does.

5) While reading your book, I couldn't help but wonder about your feelings about medical research on animals, who are unable to give consent but still are widely used in many drug experiments.  Please comment.

Thanks so much, Vicki!  For more on Vicki and her new book, check out her other blog tour stops:

Posted by Fourth Musketeer at 7:12 AM

Margo, thanks! I appreciated your challenging questions.

Great interview! Not quite sure I have the stomach to read the book, but it is good to face reality.

This sounds like a book for every middle & high school library. Brava! to the author. And thank you Margo for the tip about it.

As I read this interview, tears flowed from my face. There are incidents I experience while serving in Desert Storm. The taking of pills that we were ordered to take. Many soldiers children being born with illnesses. Soldiers coming home killing their wives. And the VA says it is not true. I am far from a government conspiracy theorist. I know what I know, and I am glad someone is writing about it. But the truth is lives are ruined, soldiers committed suicides, wives left their families. And the guilt that lingers is enough to make you question living. Like I said, incidents I've experienced.

I've read about some of these shocking incidents, but I've never read a book singularly devoted to the topic. alamarr@sbcglobal.net