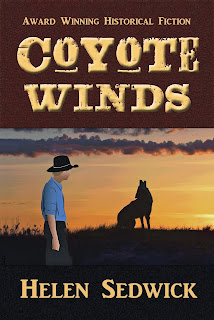 I live in a very urban area of Southern California, but one with a healthy population of coyotes.  It's not at all uncommon to see one loping down the street while you're out walking your dog, no matter what the time of day or evening.  And in the early evening, you can hear them calling to each other if you're in the right place at the right time.  Although coyotes are common enough throughout the United States, there aren't many children's books about them.  So I was intrigued to read Coyote Winds, which combines two of my favorite genres, animal stories and historical fiction.

Helen Sedwick's novel alternates between the stories of two boys, Andy, a suburban kid in Evanston, Illinois, and his grandfather Myles, who grew up during the Dust Bowl on the Colorado prairies.  Andy has grown up with grandpa's stories about growing up on a farm during the Depression, as well as his corny jokes; now that his grandpa has recently died, Andy wants to discover his grandpa's world.  First he does so through a box of mementos and writings from his grandfather, and later first-hand by traveling to the old homestead.

Through Myles' story, Sedwick skillfully recreates the Colorado prairies, where farmers believed that with enough hard work and modern farming methods, they could realize the American dream of prosperity for themselves and their families.  Or is the prairie the farmer's enemy, trying to take back what belongs to it?   Myles' story starts in 1930, when as a thirteen-year old, he rescues a half-blind coyote pup who's lost in a dust storm, taking the coyote home to raise.  Coyotes were the enemies of the farmers, who shot them if they caught them near their livestock.  Nonetheless, Myles is determined to raise and tame the pup, much like his father is trying to tame the wild prairie landscape.  Sedgwick occasionally switches gears to narrate the action from the point of view of the coyote, who she is careful not to treat as a human character, but instead as an animal who remains half-wild.

Sedwick's novel succeeds in capturing the imagination of the reader with appealing characters, the spirit of adventure in the West, and the adversity of life during the Dust Bowl.  We see this through the eyes of Andy, Myles' grandson, who stands in for the young reader.  It's a novel I had a hard time putting down.

Helen Sedwick's novel was inspired by her father's stories of growing up on the prairie in the 1930's.  An excerpt from the novel can be found at her website.


For a novel offering a completely different take on a coyote's story, you might want to check out adult novelist Elmore Leonard's very funny children's novel, A Coyote in the House, in which a coyote wants to trade places with a pampered German Shepherd movie star.
Posted by Fourth Musketeer at 5:00 AM

It sounds great! I love that it's set in Evanston, Illinois. Can I add to my Chicago book list? I'd link back to you, of course.