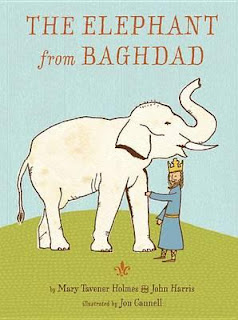 Here at the Fourth Musketeer, I am highlighting new historial picture books in honor of National Picture Book Month.  Authors Mary Tavener Holmes and John Harris seem to be expert in finding true but quirky animal stories from long ago to bring to new audiences via the picture book format.  Following their charming picture book A Giraffe Goes to Paris is this new account of an unlikely friendship between a very rare albino elephant and the Emperor Charlemagne in medieval Germany.

This improbable but true story is told in the voice of a monk who chronicled Charlemagne's life in the 9th century.  The elephant, Abu, was a gift from Harun, the caliph of Baghdad, a great Muslim leader whom Charlemagne sent emissaries thousands of miles to meet.  Evocative two-page spreads show the magnificence of the city of Baghdad, with its beautiful buildings, libraries, scholars, and golden palaces with peacocks wandering in the gardens.  When the Europeans finally set off on the long journey home, they carry many fine gifts from the caliph to his fellow ruler, including a magnificent clock.   But the most magnificent gift of all was the elephant Abu, who led a caravan filled with treasures.  Upon arriving in Germany, Abu and his keeper were invited to live in Charlemagne's palace, and his image began to appear throughout Charlemagne's empire.  He even wore armor and was led into battle!

Holmes and Harris write their story so that no prior knowledge of Charlemagne or this period of history is required to appreciate this fantastic tale.  As in their earlier book together, this book skillfully combines watercolor and ink illustrations with photographs of historical medieval art works.  It's an excellent friendship story for animal lovers or those interested in history.

An authors' note gives further information on the monk Notker the Stammerer, who they imagine narrating the story, as well as background on the elaborate mechanical clock given as a gift by Harun to Charlemagne.  Unfortunately, the clock no longer exists.  The note also provides information on the sources used to research and write this story.

I've always heard about how there were elephants in their army ... glad to hear that there is a book that depicts this interesting story!