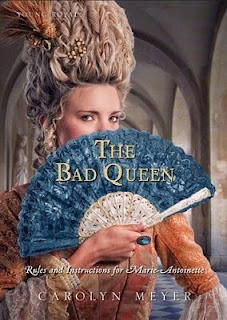 As you might guess from the title of this blog, I adore French history, particularly the 17th and 18th century, and anything to do with Versailles. I was therefore very excited to have an opportunity to review the newest novel for young people about Marie Antoinette.

Carolyn Meyer does not disappoint in this addition to her popular Young Royals series, young adult novels based on various historical princesses and queens in European history. She tries to present a balanced portrait of the much-maligned queen, whose life is told through a series of diary entries beginning when she was 12 years old and ending near the end of her life, when the author chooses to change the narrator to the Queen's 12-year old daughter, Marie Therese. Marie Therese (known by the nickname of Madame Royale), narrates the final few years of the Queen's short life and the tragic and inevitable ending at the guillotine.

Meyer writes in an afterword that she was inspired by the Sofia Coppola film from several years ago about Marie Antoinette to examine this infamous monarch. In Meyer's novel, we see Marie Antoinette evolve from a young teenager overwhelmed by the elaborate court etiquette and gossip of the Versailles court to a queen who makes her own simple world in the gardens of Versailles to escape with her children and friends from the unbearable formality of court life.

Meyer explores the early years of Marie Antoinette's marriage, in which her husband, the Dauphin, was unable to consummate their relationship, with particular sensitivity. Since Marie-Antoinette's primary responsibility was to produce an heir, the young couple's sex life (or rather lack thereof) was not only the subject of much vicious gossip both at court and beyond but also the topic of numerous letters from Marie Antoinette's mother, Maria Theresa of Austria, to her daughter.

I highly recommend this novel to any teens or even adults who enjoy French history and this endlessly fascinating monarch. The only thing that bothered me about the book was the title "The Bad Queen," and the coquettish look of the attractive cover model, which I felt perpetuated the many stereotypes about Marie Antoinette that the author tries so hard to address with a balanced point of view in the novel. I couldn't resist e-mailing Carolyn Meyer about this contradiction; she remarked that she came up with the title in an attempt to get teenagers to pick up the book, a challenge in day when so many teens are drawn to vampires and paranormal romances! Hmm...perhaps Vampires at Versailles could be a new bestselling young adult novel! I will have to pitch it to the two Meyers--Carolyn and Stephenie (no relation, I think!)

For those who might like a great companion novel to The Bad Queen, I highly recommend The Lacemaker and the Princess by Kimberly Brubaker Bradley. Bradley's novel takes place at Versailles at roughly the same time, and focuses on Marie-Antoinette's daughter and her friendship with a commoner who became her companion. This novel provides an excellent portrayal of life at Versailles--from a child's point of view.
Posted by Fourth Musketeer at 8:57 PM

The Lacemaker and the Princess has been in my tbr pile for ages....someday! And The Bad Queen sounds fascinating too.