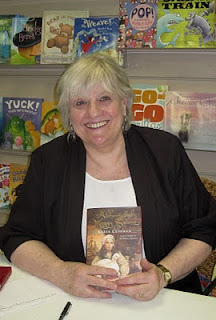 I was fortunate enough to join a small group of (mostly adult) Karen Cushman fans at Mrs. Nelsons Toy and Book Shop on Monday, where she was signing copies of her newest book, Alchemy and Meggy Swann (see my review posted earlier this week).

Ms. Cushman read aloud passages from this new exciting title, and shared with us some of the books she used to research the Elizabethan period. These included a book of streets in 16th century London, which provided her with inspiration for various actual streets from the time that appear in Meggy's story, particularly Crooked Lane. "A lot of the research is tedious," she remarked, but "when I ran across that one, I knew that was where Meggy had to live." [Meggy is disabled and must walk with the help of two sticks.]

Another source that came in "very handy" was a book of Shakespeare's insults. "There also is something online that I found—the Shakespeare insult generator. You can go and pick one from column A, one from column B, and make up your own insults," she added.

She also used a book of manners from the time period, which includes gems such as "it is unseemly to blow your nose into the tablecloth." Ms. Cushman said, "I used that kind of thing throughout my books. I learned about privacy and the lack of it at that time. For example, 'it is impolite to stop and greet someone who is urinating…' There were very few public bathrooms and the ones they had were planks over the river with holes cut in them…that’s how little privacy they had. You might pay your penny and get a third of a bed in an inn…you don’t get your own bed, your own electric toothbrush, your own I-pod."

While all her seven published novels feature girl protagonists so far, her next book--Will Sparrow's Road--focuses on a boy who's a runaway in Elizabethan England. Ms. Cushman added, "The lack of privacy at the time is one of the reasons that in the new book, the main character's a boy, and not a girl disguised as a boy…given the state of the world, it would have been very difficult to pass as someone of the opposite sex. I knew that it wouldn’t be realistic if it were a girl…a girl on the road would never survive."

"People often ask me why I write. I write because it’s my dream job…I can do it with my cat on my lap, listening to music, in the rain. If I didn’t write, where would my thoughts go, where would all of those feelings go? I can also think of nothing more important to do, especially than writing for young people."

Some of the questions from the audience:

Q: Do you pick history because you want to reach out to students?

A: I don’t think that I do it deliberately like that…I get a story in my head, which just seems to fit better in one period or another. Like Catherine Called Birdy, I couldn’t have done it as a contemporary story, unless I set it in some developing country where arranged marriages are still the norm, and then of course The Midwife’s Apprentice began with the girl in the dung heap. Rodzina started when I saw a book, a nonfiction book on the orphan train at a bookstore, and on the cover was a photograph of a huge locomotive, and about 100 little kids holding hands, looking so hopeful, so frightened, so serious, all of these at the same time, and I thought there must be a story there, and there was. My impetus to write doesn’t come from "I’m going teach kids history" or "I’m going to write a book in a certain period"—it comes from something else.

Q: Do you work on more than one book at a time?

A: Yes, but I only write one at a time, like Will Sparrow, I wrote the draft and sent it to my editor, and then I started pulling together research, getting interlibrary loans, taking notes, for the next book, which will be set in the 1600's.

Q: What about sequels?

A: When I wrote Catherine Called Birdy, I planned to do a sequel…I had the whole thing outlined. My editor said, we don’t like to do sequels, because too many people are disappointed. Well, now as it turns out, that isn’t true anymore…but I don’t know if I could go back 20 years later and recreate the voice, and I think something that was very important to people in Catherine was her voice. Some of the books are finished when they’re finished, like The Midwife’s Apprentice—that was her complete story I wanted to tell. Librarians always ask me if I will do a sequel to Lucy Whipple. They want to know about Lucy as a librarian, but I always have these new ideas running around. I’ll do a sequel to that one as soon as I finish these twelve! I get lots of letters from kids who say I wish you would write a sequel and here’s what should happen.

Q: What books do you have on your nightstand right now?

A: Wolf Hall (it’s been there for quite a while); usually YA books; one called Girl in Translation, that’s an adult book; I just bought a book called Wench, about a place in the South where slave-owners took their favorite slaves in the summer; New York Times crosswords; also, Turtle in Paradise.

A: Sarah Plain and Tall. When I taught writing I used the first page of that as an example, what are there, 150 words, yet she tells you everything you need to know.

Before she completed her program, Ms. Cushman passed around her Newbery medal, much to the delight of all in the audience. She quipped that it's "too small for the wall, too heavy to wear around the neck."

I suspect that Meggy Swann might place Ms. Cushman on the short list for Newbery contenders for 2011. Perhaps she'll add another of those medals to her collection.
Posted by Fourth Musketeer at 4:14 PM

Thanks for sharing this Q&A. I'm working on a historical novel myself, so I found the information quite interesting.
Welcome to the Kidlitosphere!
Carmela
TeachingAuthors

I love Karen Cushman! Catherine Called Birdy was one of my favorite books when I was younger. I would not be surprised to see a medal on Meggy this January!:)

I so enjoy Karen Cushman’s books...and I enjoyed your interview too. Great post...and blog Margo!

Your first Q&A is with an author who has a Newbery medal and it was in person. Very cool.