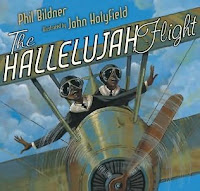 Author Phil Bildner and artist John Holyfield have produced an outstanding new picture book on little-known African-American aviator James Banning, the first black aviator to complete a trans-continental flight in 1932. Narrated by Banning's mechanic and co-pilot, Thomas Allen, the book is based on the story of their journey, undertaken in an airplane that appeared to be barely flight-worthy. "The crew from the airport thought we'd about lost our marbles...'The Flying Hoboes!' they all called us." Although they had almost no money for food and gasoline along the way, Banning decided that anyone who contributed any kind of supplies for their trip could write their name on the tip of the wing, getting into the history books along with the pilots. Sure enough, despite the hard times, people all along the way pitched in to help. But times were not only tough in terms of finances; racism also reared its ugly head along the route. In one stop, they were not allowed to use the restroom, and in another town no one would serve them at a diner. After a 3,300 mile and 21 day trip, the pilots arrive safely in Harlem, where they receive a hero's welcome, complete with ticker-tape parade.

The art in this book is especially noteworthy, and you can get a sneak preview of some of the illustrations at the author's website. The artwork, done in acrylics, offers an exuberant style and features unusual perspectives, such as in a particularly joyful 2-page spread which shows the two pilots flying in their underwear over the California desert, where the pilots seem to be about to soar off the edge of the book! I also appreciated the artist's unusual use of color, such as in a dawn scene flying over the Statue of Liberty, where Holyfield makes abundant use of contrasting purple and green, or another scene in Oklahoma where a yellow sky meets the green fields.

This is a wonderful book for teaching African-American history, for children interested in the history of aviation, or anyone who likes an inspirational tale, and would be an excellent addition to any public or school library.

While the author provides some historical background in a forward, and adds that the book is historical fiction, not biography, I would have enjoyed an afterword with a few more biographical facts on both pilots who inspired this story.

Recommended for ages 5-10 (Kindergarten-4th grade).
Posted by Fourth Musketeer at 5:06 AM