Book review: My Life with the Lincolns by Gayle Brandeis (Henry Holt, 2010) 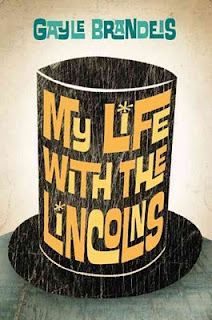 In her first novel for young people, Gayle Brandeis has created a quirky and delightful heroine, Mina Edelman. It's 1966 in Downers Grove, Illinois, a nearly all-white suburb of Chicago, and Mina is convinced that she and her family are reincarnations of the Lincolns. When the novel opens, her main worries are how to prevent her father from being assassinated, her mother from going crazy (like Mary Todd Lincoln), and herself--a reincarnation of Willie Lincoln, or so she likes to imagine--from dying at age 12.

But when her dad, who owns Honest ABE's furniture store, begins taking her to civil rights marches led by Martin Luther King, their life begins to change in very real ways. Mina and her dad Al participate in protests designed to pressure the Chicago political establishment to support open housing--the abolition of housing segregation. When her dad meets Carla, a black activist at one of the meetings, they take Mina and Carla's son to pose as an interracial family at various real estate offices around Chicago, demonstrating the unspoken but very real restrictions that existed. Mina's father is exhilarated by his experiences, and is so concerned with oppressing blacks that he fires their cleaning lady--"I don't want to oppress you anymore," he says, completely oblivious to the fact that the woman needs the income to pay her rent. "You need a job that doesn't subjugate you," he tells her, convinced he has done the right thing.

But when Al brings his battle for civil rights to Downers Grove, bringing Carla's son to live with them for the summer and holding meetings for the Chicago Freedom Movement in his furniture store, it splits the family apart. Will Mina's family survive to create a better future for themselves and their community?

Although this book clearly deals with many serious events, both real (such as Martin Luther King's getting hit in the head by a rock during a Chicago demonstration) and fictional (strife in Mina's family), tweens will enjoy Mina's eccentric voice in this novel, which was originally written by Brandeis for adults but later reworked for a young adult audience. This is also a coming-of-age novel, which deals with some of Mina's discomfort at her changing body in a lighthearted and humorous way that should appeal to tweens and teens alike.

I particularly liked the fact that Brandeis deals in this book with two topics not often explored in books for young people--the cooperation between Jews and blacks in the civil rights movement, and also King's work in the North, which is not nearly as well known and taught in school as his civil rights work in the South.

If you like to listen to music while you read, check out Largeheartedboy.com, where you can find a playlist put together by Brandeis especially for this novel!

To learn more about Dr. King in Chicago, you can:
1) watch the 2008 documentary, King in Chicago, available from Amazon.com but unfortunately not from Netflix.
2) read original source material, see photos and video at the website of PBS' acclaimed documentary Eyes on the Prize.
3) see the website set up in 2006 for the 40th anniversary of the Chicago Freedom Movement.
Posted by Fourth Musketeer at 5:00 AM