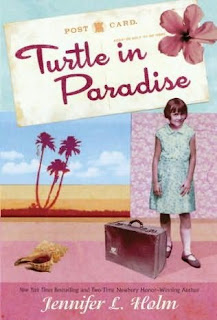 Jennifer L. Holm is probably best known among kids today as the author of the incredibly popular Babymouse series of very pink graphic novels about a mouse's adventures in elementary school . In Turtle in Paradise, however, Holm returns to her beginnings as an accomplished historical fiction writer. Two of her prior novels in this genre, Our Only May Amelia and Penny from Heaven, were Newbery Honor books.

Set in the summer of 1935, Turtle in Paradise features a spunky and tough heroine named Turtle, who kept making me think of Tatum O'Neal's character in the movie Paper Moon. I particularly liked the opening paragraph of the novel, which sets the tone for Turtle's character and voice:

"Everyone thinks children are sweet as Necco Wafers, but I've lived long enough to know the truth: kids are rotten. The only difference between grown-ups and kids is that grown-ups go to jail for murder. Kids get away with it."

As the novel opens, Turtle's mom, a live-in housekeeper and single mom, has a new job with a woman who doesn't like kids; Turtle is therefore shuttled off to live with an aunt and cousins she's never met in Key West, Florida. The plot of this charming novel seems almost beside the point; to me the story is really about Turtle and the colorful characters who surround her in Key West. Even Hemingway makes several brief appearances (in the first one referred to only as a writer named "Papa" but any adult readers will get the reference!) The kids in the neighborhood, most of whom are related in some way to Turtle and her family, are all known by nick-names that will remind readers of The Little Rascals--in this novel you'll meet Beans, Pork Chop, and Kermit, who comprise the Diaper Gang, a group of kids (all boys) who pick up fussy babies, including one named Pudding, from their harried mothers and cart them around in a little wagon for a few hours until they fall asleep. Because no one has any extra money, the boys work for candy! Other notable characters include a crotchety old grandmother that Turtle never knew existed. There's even the promise of buried treasure for the kids to look for during the hot summer months.

What I enjoyed most about this book was the way Holms recreates a different time and place, a place where mothers send babies off with neighborhood children, kids can go by themselves to the local theatre to see Shirley Temple movies, kids read the funny pages instead of playing video games, and a horse-drawn wagon comes around selling ice cream for a nickel. Still, the story doesn't descend into sentimentality, particularly because of an ending in which everyone's dreams definitely do not come true. Life is not a Hollywood movie, Turtle would tell us with a wisdom beyond her years.

Like Penny from Heaven, this novel was inspired by Holm's own family stories, in particular the story of her great-grandmother, who immigrated from the Bahamas to Key West in the late 19th century. Holm provides an excellent Author's Note which provides some background information on Key West, and other real-life subjects that come up in the novel, including photos of Shirley Temple and a reproduction of a Little Orphan Annie comic, both icons of the period that kids might not recognize today. She also provides a brief bibliography and list of related websites.
Posted by Fourth Musketeer at 5:00 AM