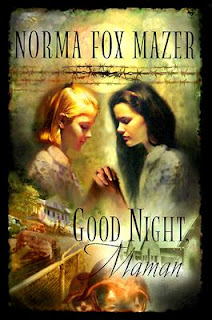 This moving novel by award-winning children's novelist Norma Fox Mazer (who sadly passed away in 2009) tells the story of Karin Levi, a 12-year old girl whose comfortable life is overturned when the Nazis occupy Paris in 1940. Karin, together with her mother and older brother, flee Nazi-occupied Paris and start a new life of constant fear, as they are first hidden in the countryside, and later escape into American-occupied Southern Italy (without their mother, who by this point in the narrative is too ill to travel).

The two children manage to secure passage on the Henry Gibbons, an actual ship filled with European refugees which came to the U.S. in 1944. Although the United States, like other countries around the world, largely turned its back on the desperate Jews of Europe, in 1944 FDR decided to permit transport of 1,000 refugees from Italy to the United States. Many but not all of those who sailed were Jews, as Roosevelt did not want the venture to be perceived as a "Jewish project."

The ship's occupants were sent to Fort Ontario in Oswego, New York, where they were put in a refugee camp surrounded by barbed wire. Mazer explains in an afterword that the 982 people on this ship, who came from 15 countries and ranged in age from an infant to an 80-year-old man, were the only group of refugees brought to America by the U.S. government during World War II. When the war ended, those "guests" were allowed by President Truman to stay in the United States.

As one might expect, Karin's adjustment to life in the refugee camp is not easy. Karin, who believes her mother may still be in hiding in France, pours out her heart in letters to her dear maman that she is unable to mail, not knowing where her mother might be. Her older brother Marc "became Maman," trying to provide routine and structure for his younger sister. But he doesn't want to talk about the past. He asks her "Why are you always thinking about things that are done with, Karin? It only makes you feel weak and unhappy." Gradually Karin begins to make friends with other girls at the camp, as well as an older couple, Mr. and Mrs. Stein, who remind her of her grandparents. Soon a girl named Peggy from the other side of the fence befriends her as well, helping her to learn to sound American, and when Karin finally is allowed to start school, Peggy is in her class. Karin is even able to spend her first American Thanksgiving at Peggy's home. But will Karin ever be reunited with her beloved mother?

This novel, published in 1999, would be an excellent book to read in conjunction with Is It Night or Day?, since both deal with young girls about the same age who leave Europe without their parents to begin life as refugees in America--one at the refugee camp in Oswego, the other with relatives in Chicago.

A reading and activity guide for this novel is available on-line.

Although Karin and Marc Levi are fictional characters, for those interested in learning more about this unique refugee camp in Oswego, check out some of the following resources:

1) Study guide and comprehensive bibliography on the refugee camp;

2) the Safe Haven Museum and Education Center, dedicated to keeping alive the stories of the 982 refugees. Among the resources on their website are recorded testimonies of some of the camp's residents.

3) the story of two of Oswego's residents, Frieda Löwy and her husband, Max Sipser, written by their American niece, Carole Garbuny Vogel.
Posted by Fourth Musketeer at 8:00 AM

its an ok book also might be a boy book