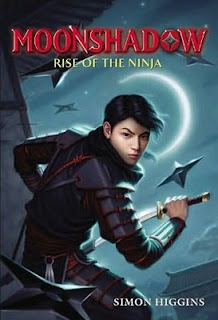 Set in Japan at the end of the medieval period and dawn of the Tokugawa era, this exciting, action-packed novel tells the story of young Moonshadow, an orphan who has been raised to be a member of the Grey Light Order, a secret brotherhood of ninja spy warriors. The members of the order are the closest thing he has ever had to a family, and he feels a strong loyalty to them. Moonshadow is not only highly trained in all sorts of weapons and disguises, he has a unique ability known in the book as The Eye of the Beast, which allows him to link his mind to that of an animal, using its senses to see.

His first mission pits him against Silver Wolf, a powerful samurai who is plotting to disturb the new peace in Japan, with the help of European allies. Silver Wolf has plans that could change the face of Japan forever--designs for guns that can file multiple times, with improved accuracy. Moonshadow's mission: to break into Silver Wolf's well-guarded castle and steal the plans. He must overcome not only a special crack team assembled by Silver Wolf to guard his castle, but also another ninja--a girl--sent to steal the plans as well.

Simon Higgins has unique qualifications to write about this period of Japanese history. A former detective, he is not only an award-winning children's author in Australia, he is also an expert in Iaido, the Japanese art of sword-drawing and duelling. His intimate knowledge of weaponry, armor, and other fighting implements definitely shines through in the book, with its very detailed and realistic action sequences. Higgins also provides plenty of local color through Japanese vocabulary scattered through the text; many of these words will be familiar to manga/anime fans but Higgins provides a useful glossary, complete with definitions and how to pronounce the foreign words.

Teachers notes on Higgins' website provide excellent historical and cultural context for the novel. Higgins explains that "the world of Moonshadow is romanticized or fantasy-enhanced history, rather than traditional epic fantasy in the Lord of the Rings or Chronicles of Narnia mode." Many of the elements of the story, including the city of Edo, the Tokaido (Japan’s great highway), and the shinobi-ninja secret weapons and practices are based on historical fact, as are many of the religious traditions depicted.

A sequel, Moonshadow: The Wrath of Silver Wolf, was published in Australia in 2009 and I expect it will be available in the U.S. as well in the near future.

This novel is likely to be very popular with young people who like action-adventure novels, particularly boys. It's a great book to recommend to young people who are fans of Japanese manga and anime. Highly recommended for school and public libraries, as well as for summer reading.