Boys of Summer #2: Book Review: All Star!: Honus Wagner and the Most Famous Baseball Card Ever, by Jane Yolen and Jim Burke (Philomel, 2010) 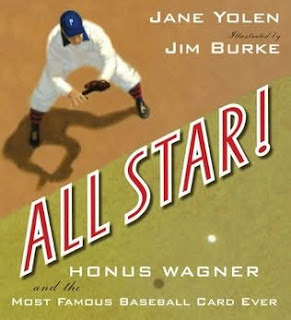 In this beautiful new picture book biography, award-winning author Jane Yolen tells the story of one of baseball's all-time legends, shortstop Honus Wagner. Yolen opens her book explaining that a Honus Wagner baseball card sold for almost $3 million at auction in 2007. But in the book, we learn why his cards are especially rare. When Wagner realized his cards were being used to sell cigarettes, he had the card pulled off the market, concerned that it gave young people the wrong idea about smoking, a particularly refreshing story in this day of multi-million dollar endorsements of all kinds for athletes.

Born to a poor German immigrant family in Pennsylvania, Honus attends school only until sixth grade before joining his brothers and father in the coal mines. But Sundays were reserved for baseball, when Honus and his brothers played the game they loved. When Honus gets to the big leagues, there were only 12 teams and fewer players on the roster, but during his years with the Pittsburgh Pirates, Honus wins 8 National League batting championships and sets many other records. Yolen writes:


Clearly he was a great baseball player...some say the greatest baseball player ever. And he did it all without drugs or fancy training programs or million-dollar incentives--just for the pure love of the game.

In his fourth collaboration with Jane Yolen, illustrator Jim Burke's oil paintings greatly enhance her story. He uses an understated palette full of browns and other earth tones that gives an old-fashioned tinge to the pictures, fitting for the turn-of-the century time period. Yolen's text is written in a straight-forward style, and she punctuates her stories about Honus Wagner with the exclamation, "How about that!" a phrase that Honus often said. This book would be greatly enjoyed by young baseball fans and would be excellent to read aloud in class for elementary school aged children.

And here's a picture of the world-famous baseball card that sold for $2.8 million: 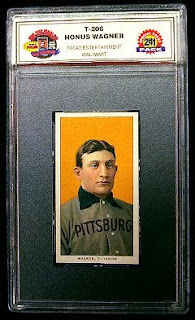 Readers might also be interested in exploring the official Honus Wagner website, which includes photos, facts, statistics, and biographical information on the legendary player.
Posted by Fourth Musketeer at 5:00 AM

Thanks for joining Nonfiction Monday today! What a story - love that he was willing to take a stand for his beliefs, even if it was unpopular. That's definitely something we don't see a lot of today in our superstars.