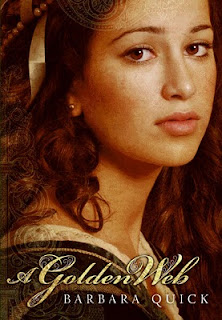 Recommended for ages 12 and up
Barbara Quick's first novel for teens tells the story of Alessandra Giliani, a young girl in 14th century Bologna who is reputed to have been the first female anatomist. Alessandra feels trapped in the body of a young girl--she dreams of studying medicine at a time when women were burned at the stake for such heresy. Yet why would God have given her such a keen mind if he did not want her to do something with it, she wonders? She's a much quicker student than her brother, who'd much rather go hunting than study Aristotle. Her stepmother is eager to get rid of her least-favorite-stepchild, and sends Alessandra off to spend a year in a convent before her inevitable marriage. But Alessandra refuses to accept the fate society has laid out for her, and concocts an elaborate plot to disguise herself as a boy so that she can study in Bologna.

In a plot twist that reminded me of Yentl, the movie/Isaac Bashevis Singer story in which a young Jewish girl also lusts after learning, Alessandra falls in love with another student, Otto, who shares her boarding house. As they study together, they become attracted to one another--will Alessandra reveal her true identity to Otto so that they can share more than learning?

This was an entertaining book, with many romantic twists that will appeal to young girls. The story emphasizes how few choices there were for young women of the time period even those from well-to-do families. Basically Alessandra could choose to marry or enter a convent. Toward the end of the book, there are some very graphic scenes of Alessandra dissecting animals and a human corpse that I frankly found too much for me (I''ll admit I'm squeamish about these things) and that I had to skip over.

Quick explains in an afterword that "whether Alessandra Giliani really did live is somewhat of a point of academic controversy," since she was unable to find a written record of her in documents before the 18th century. There is little real information on Alessandra, so most of the details of the story are made up. However, the author does provide many interesting period details about the lives in 14th century Italy, in particular the lives of students.

This book is likely to especially appeal to readers who like very independent-minded female heroines, as well as those who are interested in women's history.
Posted by Fourth Musketeer at 9:01 AM

Thank you for this lovely review of my novel, Margo! If you'd like to do an author interview, I'm at your service. You might also enjoy reading my 2007 novel, VIVALDI'S VIRGINS, which takes place in the orphanage in 18th century Venice where Antonio Vivaldi was resident priest and composer. Your readers can see a book trailer and read lots of background about both novels at http://www.BarbaraQuick.com

All best wishes for your really beautiful blog!

I'm jealous, this is definitely on my wishlist! Great review :)

Fantastic review - I'm putting this on my wishlist for sure.