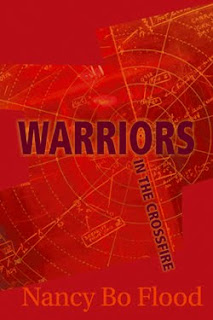 I've read lots of novels that are set during World War II, but many more that take place in Europe than the Pacific. This slender but well-written new book by Nancy Bo Flood concentrates on a small piece of the war in the Pacific, a battle that took place on the island of Saipan, part of the Mariana Islands located about 1,300 miles from Japan, in the final months of the war. This island was considered to be of great strategic importance by both the Japanese and the American forces. The Americans expected to use the island as an air force base in order to launch an invasion of Japan, which had occupied the island since the 1930's. Saipan was one of the bloodiest battles of the war, with more than 30,000 Japanese and American soldiers killed. But what about the native population of the island?

This story is told through young Joseph, whose father is the village chief, and his cousin Kento, who is half-Japanese. As the battle over Saipan approaches, the Japanese issue more and more restrictions on the native population, and close down the school, where Joseph is the only native student. We see the tension between Joseph and the Japanese youth, a situation that threatens to explode at a celebration where the natives are asked to perform their traditional dances for the Japanese elite. With the situation increasingly tense, the men of the village spend more and more time talking and arguing. One night, his father wakes him up when it's still dark, and makes Joseph follow him over a rough trail to a hidden cave which has served in the past to hide people in times of war. His father tells the young boy: "Remember the turtle, Joseph. When the shark smells blood, he attacks. The turtle pulls in his head, waits...survives. Joseph, survive. Bring our family here." His father warns him that when the battle comes, he must trust no one, not even his half-Japanese cousin Bento. His father has prepared the cave with stores of food and water. Joseph's sensei (teacher), too, tries to warn his former student that the Americans will invade and that he should go far away from the shoreline. He gives him a book of poetry by the celebrated poet Basho as a keepsake.

When the battle begins, both Joseph and Bento, too young to be soldiers, must help their families survive, becoming warriors in the process.

Depicted in this novel is one of the most tragic episodes of the war in the Pacific; when the Japanese realized the battle was lost, they marched all their citizens, including the elderly and children, to the bluffs of "Suicide Cliff," a bluff that plummets more than 800 feet to the sea. Flood explains, "Families lined up, youngest to oldest, walking backwards until they stepped, or were pushed, over the cliff's edge. From helicopters, American soldiers dropped leaflets and broadcast messages urging people not to jump but to surrender. These reassurances had little effect; hundreds leapt to their deaths." Those civilians, native and Japanese, who survived the battle were forced into refugee camps where they lived until the war ended in July, 1946.

This novel is told in short, sparsely written chapters, which begin with a short free verse poem related to the content of the chapter and a title in kanji (Japanese script) as well as in English.

Readers interested in learning more about the Battle of Saipan can see a virtual exhibit from the American Memorial Park in Saipan which includes many actual photographs taken during or after the battle as well as links to testimonies from native survivors.

I highly recommend this book for school or public libraries.
Posted by Fourth Musketeer at 8:41 AM