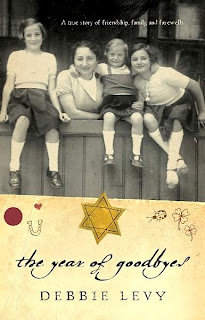 Recommended for ages 10 and up

While there are many novels and non-fiction books about the Holocaust aimed at young readers, with more appearing every year, Debbie Levy's unique little volume deserves a place on school and public library shelves. Levy's mother, Jutta Salzberg, and her immediate family were among the fortunate few--they left Germany in 1938 for America, barely escaping arrest and probable death at the hands of the Nazis.

One of the few cherished items Jutta was able to bring with her was her posiealbum, or poetry album, a kind of scrapbook popular with young girls in Germany in the 1930's. As Levy explains in the introduction, posiealbums were blank books in which young people "collected poems, drawings, and expressions of good wishes from friends and family." Levy intersperses reproductions of actual pages from the posiealbum, along with English translations, with free verse poetry written in her mother's voice. These poems link the entries together and narrate the tale of the family's experiences in 1938, their last year in their homeland, poignantly described in the title as the year of goodbyes.

Through Jutta's reflections and those of her friends and family in the posiealbum, we see life go from bad to worse for this typical 12-year-old girl and her family. As persecution of the Jews worsened, Jutta's father obtains permission from the Nazis to leave Germany, but will he be able to get visas for them to emigrate to the United States? He becomes increasingly desperate, even threatening to jump out the window of the American Consultate in Hamburg. When the visas are finally obtained, we see the family's preparations to leave Germany, as they are forced to leave nearly all their possessions and money behind. None of their friends and family could imagine what was in store, however, for those who remained behind. Levy has carefully researched the fate of all those friends and relatives who inscribed their best wishes in Jutta's album; in an afterword, she reveals what happened to each. As the reader can easily imagine, many of them later perished in the camps. The afterword also provides a context for the year described in this book, so that young people without much knowledge of the period can understand the developments which surrounded Jutta's family and friends. In addition, Levy provides a helpful note on how she did her research on those who had written in Jutta's album and a selected bibliography for further exploration of issues surrounding the Holocaust.

While the reader would imagine that Jutta, having safely escaped Nazi Germany, never saw any of her classmates again, there is an astonishing footnote to this story. When Levy wrote an article published in the Washington Postin 1998 about her mother's escape from Nazi Germany, the article was seen by several of Jutta's former classmates that were now living in the U.S. In 2000, seven of the "girls" from Jutta's Hamburg school held at reunion in Washington, D.C., bringing their posiealbums with them. One can only imagine their joy and also their sorrow for those classmates who did not survive the Holocaust.

Through a blog, Levy has begun a posiealbum project through which readers can continue the posiealbum tradition by posting their thoughts and feelings on an on-line album. Viewers can also see some of the original pages from Jutta Salzberg's poesiealbum, reproduced in full color rather than black and white as in the book--plus an image of the poesiealbum itself.
Posted by Fourth Musketeer at 9:00 AM