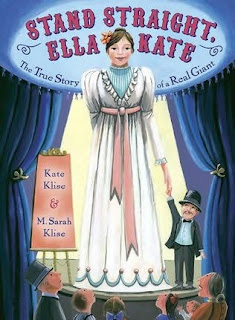 The versatile Kate Klise and M. Sarah Klise have penned and illustrated a variety of titles for young people, ranging from picture books to novels to non-fiction. Their newest book, a large format picture book, is based on the true story of a real woman giant, Ella Ewing, who lived from 1872 to 1913. "Most tall tales are made up," the book opens. "But my tall tale is true. I was a giant--a real, live giant." Narrated by Ella herself, the book features delightful illustrations, which evoke a primitive style well suited to the setting, rural Missouri toward the end of the 19th century. When Ella was 7 years old, she started growing at an "alarming rate." Soon she couldn't fit into the school desks, and her father had to make her a custom one. "Stand straight, Ella Kate," say her parents in a rhyming refrain.

By the time she was thirteen, she was almost six feet tall, and life wasn't easy. The story describes how she was selected to give a speech on the 4th of July, but when she stood on the stage to recite, people in the audience yelled out that she was a freak. But Ella keeps growing--and soon a visitor from Chicago wants to put Ella on exhibit at a museum in Chicago, and offers to pay her $1,000 a month--a huge sum in those days. In fact, over the next few years, she travelled the country, appearing in circuses, museums, and a world's fair. She claimed to be 8 feet, 4 inches tall when she finished growing.

Klise and Klise enrich the story with fascinating anecdotes about Ella, including how she appeared on exhibit holding a $1,000 bill in her hand. "Anyone who could reach the money unassisted was welcome to take it. No one ever did." With the money she bought, Ella paid off her parents' farm, and built herself an especially big house, with custom furniture designed for her large size. Her neighbors loved to come and hear stories about all the places she had visited, since this was a period where few people ever ventured more than a few miles from their homes. In the folk-art inspired illustrations, we see Ella with an elephant, a tiger, and the skyscrapers of New York. According to this book, Ella soon missed her traveling, and returned to work as a circus star.

An author's note at the end of the book offers biographical information about Ella, including an explanation of the disease she had, gigantism, which was not understood by the doctors of the day. We learn that Ella died at the early age of 40, and was all but forgotten except for the area in Missouri where she had lived, a community which knew her as the Gentle Giantess.

This book would make a great read-aloud for kindergarten to third grade classes. The story emphasizes how we should be sensitive and respect the differences of others in a way which is not heavy-handed, and children will be fascinated by this tale of a woman who would have towered over the basketball players of the NBA.

For those who would like to know more about Ella, an extensive website is available on "The Missouri Giantess." 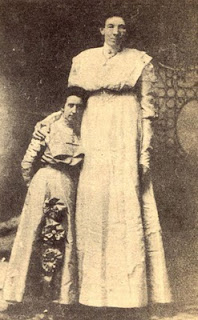