Book Review: A Nest for Celeste: A Story About Art, Inspiration, and the Meaning of Home, by Henry Cole (Katherine Tecen Books, 2010) 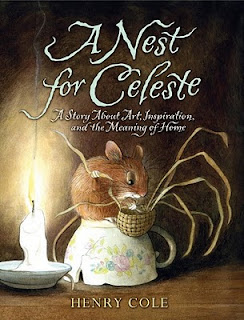 I have wondered for a long time about the relationship between mice and children's books. Few people like the little critters in real life, unless as fodder for science experiments, yet mice are the heroes of more children's books than you can shake a piece of cheese at. I wouldn't be surprised if someone has written a graduate thesis on this topic.

In A Nest for Celeste, Celeste joins a pantheon of unforgettable mice heroes and heroines in both children's novels and picture books. Anyone who loves children's books knows Henry Cole as an immensely talented and versatile illustrator. As he says on his website, "From wombats and weasels to feathers and felines, Henry Cole has been busy as a beaver illustrating books for all ages." In fact, he has illustrated 70 books in his career, including another heroic mouse tale, Livingstone Mouse, penned by Pamela Duncan Edwards. Several of his picture books were written as well as illustrated by Cole, but A Nest for Celeste is his first foray into writing and illustrating a chapter book.

This is no ordinary chapter book, however. The delicately shaded black-and-white pencil illustrations are integral to the story, in much the same way as the illustrations in Brian Selznick's The Invention of Hugo Cabret advance the plot of that novel. Cole uses many different visual perspectives, often letting us into the scene from the perspective of the tiny mouse. In other words, don't get this one on audiobook! Our small heroine, Celeste, lives on a plantation near New Orleans. She is, not surprisingly, no ordinary mouse. Among other talents are her ability to weave baskets out of the native grasses of Louisiana, which she uses to gather food left underneath the dining room table of the family that lives in the plantation house. It's 1821, and the house has some special visitors: James Audubon and his young apprentice, Joseph, who are drawing and painting the local birds and wildlife. Celeste is lonely until she makes the acquaintance of the friendly Joseph, who likes to carry around Celeste in his shirt pocket, affectionately dubs her "Little One" and feeds her peanuts.

Celeste's bravery is tested many times in this book, not only by the housecat, always ready to attack, or the rats who bully her into giving them her food, or a terrible thunderstorm. Nowhere is really safe for the little creature, and she is forced to relocate her nest several times in the course of the story, finally making her home in a dollhouse filled with mouse-sized furniture that she finds in the attic.

But before she knows it, it's time for her new friend Joseph to leave. Celeste is a very philosophical mouse. Cole writes:

"She pondered: Was it worth the feelings of sadness and melancholy to make a friend and then lose him? Would she rather not have the heartache of losing a friend and not have the memory of friendship? No, she decided, no."

But as we learn from the title, this is not just a story about friendship and the meaning of home; Cole also teaches us about art and inspiration by his exploration of how Audubon created his famous artwork. Modern readers will undoubtedly be shocked by his techniques: nearly all the birds he painted were shot and killed first, then posed using wire to recreate a lifelike pose. While some children may be disturbed by this, I appreciate that Cole chose to portray Audubon's work in an historically accurate way. The author also provides a useful afterword with additional facts about Audubon, his assistant, and the time they spent on the Oakley Plantation in 1821. He also includes a copy of Audubon's painting of an osprey or sea hawk, a bird who figures in the story as a friend of Celeste (a rather unusual friend for a mouse, perhaps!)

For more information on Audubon, young readers might want to explore Audubon: Painter of Birds in the Wild Frontier, by Jennifer Armstrong and Jos. A. Smith, a large-format picture book biography.
Posted by Fourth Musketeer at 5:00 AM