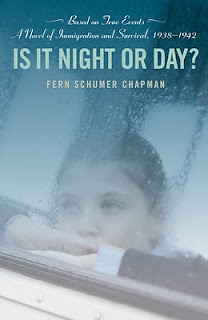 With the benefit of hindsight, we know that 12-year old German Jew Edith Westerfeld, whose parents put her on a ship to America in 1938, was one of the lucky ones. But as she watched her beloved family get smaller and smaller on shore as the ship pulled away, she didn't feel lucky at all.

Like so many families in Germany, the Westerfelds of Stockstadt thought of themselves much more as German than Jewish. After all, they had lived in their community for over 200 years and Edith's father, a war veteran, was a respected civic leader. Not until Edith's 12th birthday party in 1937, when none of the invited guests dared to show up at a Jew's house, did Edith realize how everything had changed. Her older sister, Betty, had already been sent to America the year before; however, her grandmother refused to leave her home in Germany and Edith's father wouldn't leave Oma Sarah behind. But as the situation in Germany deteriorates for the Jews, her family sends her off to live with an aunt and uncle in Chicago, telling her that she must do what she can to raise money for their passage, arrange for work for them, and find someone to sponsor them--a daunting task for a young girl who couldn't even speak English.

When Edith arrives in Chicago, her uncle tries to be kind to her, but it is clear that her aunt and teenaged cousin see her as a burden, and (almost in Cinderella-mode), as someone to wax the floor and carry the groceries from the store. School's not easy either; Edith is put in first grade, where she can't even fit into the tiny desks. The kids at school mockingly call her "Goldilocks."

As she improves her English by reading the newspaper, Edith becomes a fan of the comics and the sports section, and soon shares her uncle's love of baseball, particularly admiring Jewish baseball superstar Hank Greenberg. She and her uncle begin a German Immigration Fund jar, adding her small earnings from delivering water. But when she and her uncle see the newsreels of Kristallnacht, her uncle sponsors a raffle to raise money to get her family out of Germany. Finally, a letter arrives from her mother, addressed to her uncle--her father has been sent to a labor camp. Her mother has desperately written to relatives all over the world--"but so far, nothing." When the U.S. enters the war, Edith has to register as an enemy alien, but what will happen to her beloved Mutti and Vati (mother and father) and to the servicemen stationed overseas, whose families mark their absence with flags with blue and gold stars?

This novel is based on the true story of Chapman's own mother, Edith Westerfeld. Although the book will resonate particularly with Jewish readers, the story of immigration and what it is like to be a refugee in a strange land is a universal one for Americans, and one that will appeal to readers in middle school on up.

Click here to read a short excerpt from the book.

Is It Night Or Day? has been recognized by the American Library Association on its Best Fiction for Young Adults (BFYA) list and was also named on Booklist's Top 10 Historical Fiction list.

Edith was one of 1,200 children sponsored by an American rescue organization composed of Lutherans, Quakers, and Jews that took place from 1934 to 1945. Approximately a dozen children from one to sixteen years were brought in monthly through this program, a pitiful figure compared with what the United States could have done during that period.

Although young Edith was admitted through this program, the United States' record on admitting Jewish refugees during this period is shameful. While 1,200 children may sound like a lot to some of the novel's readers, this represents a tiny number compared to the number of refugees desperately seeking asylum in the United States and elsewhere. Although not mentioned in the author's Afterword, First Lady Eleanor Roosevelt lobbied diligently for the Child Refugee Bill, which would have allowed 10,000 Jewish children a year for two years to enter the United States above the usual German quota, but Congress refused to pass the bill, despite the fact that families had already been found to take in the children. I would have liked to see the author mention in her afterword how little was actually done by the U.S. regarding the refugees, including perhaps a brief discussion of the Evian Conference in 1938 (the year Edith leaves Germany). During that nine-day meeting, convened by the United States to discuss the Jewish refugee question, delegates offered sympathy for the Jews, but only one country, the Dominican Republic, offered to grant large numbers of Jews sanctuary. In fact, the conference was ultimately a victory for Nazi propaganda; "Nobody wants them," claimed the German newspaper Völkischer Beobachter after the Evian Conference.
Posted by Fourth Musketeer at 10:22 AM