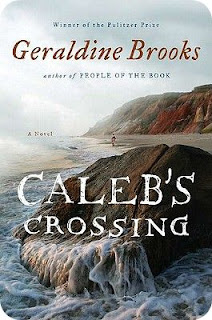 Geraldine Brooks, author of the acclaimed historical fiction best-sellers March, People of the Book, and Year of Wonder transports her readers to 17th century New England in her just released new novel, Caleb's Crossing.  Brooks was inspired by the life of Caleb Cheeshahteaumauk, a member of the Wompanoag tribe in Martha's Vineyard, who became the first Native American to graduate from Harvard College in 1665.  Almost nothing is known of this young man, but Brooks uses these bare facts to construct a spellbinding story of the early days of Puritan America.

Our main character and narrator is actually not Caleb, but rather Bethia Mayfield, the daughter of the minister in the tiny Puritan settlement of Great Harbor on the island we now call Martha's Vineyard.  Bertha is a fictional character, but her family is based on the real-life Mayhew family who originally settled the island.  Bethia's father ministers to the Native population, and his first convert helps him learn the Wampanoag language, which the very bright Bethia also picks up by listening in on their lessons.  As a twelve year old girl, Bethia seems to have an unusual amount of freedom to roam the local area, where she meets a young Wampanoag boy, the son of a local chieftain, whom she names Caleb. The two forge a secret and powerful friendship.

Caleb later comes to live with her family, along with Joel, another young Wampanoag boy, to study Latin and Greek with Bethia's brother Makepeace in preparation for enrolling at Harvard.  Fate dictates that Bethia, too, go to Cambridge, to work for her keep while her brother studies for the Harvard exam along with Joel and Caleb and other sons of the colonial elite.  Two different suitors are after her hand in marriage; one a farmer from her village and the other a scholar at Harvard, the two offering her very different lives.  Will Bethia make her own destiny?  And how will Joel and Caleb cope with life at Harvard, far from everything they are familiar with from their native civilization?

Bethia's life is dictated to her by the constraints of her time and culture; although she is very bright and craves knowledge so much that she listens in on her brother's lessons so that she may learn Latin, she writes "that I might be literate but not learned was the choice of my father; the lot of a girlchild."  Her life is plagued by many tragedies that were all too common in those days; death of small children, death in childbirth, poverty, and perhaps most of all, by her feeling that she cannot control her own destiny.

Told in the first person by Bethia, this beautifully written and moving story is engrossing from the start; her narrative has an abundance of old-fashioned terms and language that create a distinct sense of time and place yet somehow don't distract from the main story.  Bethia's struggle to define herself in Puritan America and discover her path would make this an appealing story for teenagers as well as adults, although the pacing of the story is somewhat slower than what one would find in a young adult novel.

I have read all of Brooks' other novels and would rate this one as equally outstanding.  Highly recommended for adults and teens looking for some literate historical fiction for the summer!

Reading Brooks' descriptions of 17th century American life, I was struck how Puritan America would definitely be down at the bottom of the list of times I would NOT want to time travel to!  Her descriptions of life in the town of Cambridge were especially vivid and certainly did not make 17th century college life sound very appealing.  It made me remember Colonial House, a PBS reality show in which participants recreated life in 1628 Plimouth.  Leave a comment with a period you would NOT want to visit...
Posted by Fourth Musketeer at 9:34 PM

I loved Colonial House!
I received an ARC of Caleb's Crossing, but still haven't managed to read it yet...I have loved ALL of her books!