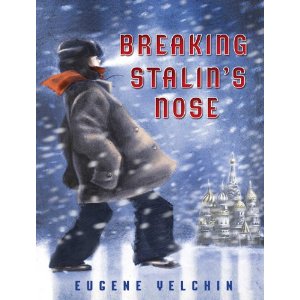 
Sasha Zaichik has known the laws of the Soviet Young Pioneers since the age of six:
The Young Pioneer is devoted to Comrade Stalin, the Communist Party, and Communism.
A Young Pioneer is a reliable comrade and always acts according to conscience.
A Young Pioneer has a right to criticize shortcomings.
But now that it is finally time to join the Young Pioneers, the day Sasha has awaited for so long, everything seems to go awry. He breaks a classmate's glasses with a snowball. He accidentally damages a bust of Stalin in the school hallway.  And worst of all, his father, the best Communist he knows, was arrested just last night.
This moving story of a ten-year-old boy's world shattering is masterful in its simplicity, powerful in its message, and heartbreaking in its plausibility.
Yelchin is a creative and versatile illustrator whose most recent picture book, The Rooster Prince of Breslov (written by Ann Stampler), won the National Jewish Book Award; I am eager to read his first novel.  Here's what Yelchin says about the book in a recent interview:

"I always felt that Hitler’s terror is well documented, but Stalin’s terror– millions and millions of innocent lives lost – is not widely known. The book is dedicated to my father, who was lucky to survive what is called the Stalin’s Great Terror of the 1930s. This is when the story unfolds, in the 1930s Moscow during the worst period of Stalin’s rule. The main character is a ten-year old boy, brainwashed by the system and in love with Stalin, dreams about becoming a Young Soviet Pioneer. Soviet Pioneers were similar to the American boy scouts, but highly politicized. I used to be a Pioneer. But the night before the boy is finally to become a Pioneer, his father, who is a high-standing member of Stalin’s Secret Police, is arrested. The next day at school, he has to make a choice - to fulfill his dream, or walk away. The book is really about making a personal choice when the only choice available is the one dictated by the government."
Waiting on Wednesday is a weekly meme hosted by Breaking the Spine.
Posted by Fourth Musketeer at 5:00 AM

Here's My Waiting on Wednesday Pick!

And if you're a Mortal Instruments Fan
Please try to visit our Thoughts and Rant about Jace Wayland Being Casted!

interesting pick. i haven't heard of this book before but i'm definitely going to check it out.

Check out our WoW.

Cute blog name! I love it. I hadn't heard of this book before now but I am going to check it out!

What a wonderful and unique pick :)