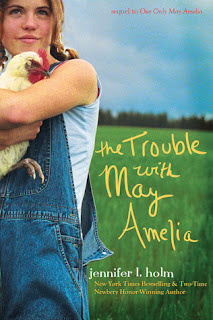 
Jennifer Holm's 1999 novel Our Only May Amelia (which received a Newbery Honor in 2000) is one of my all-time favorite historical novels for kids, and I was eager to read the sequel which has just been released this spring.  If you haven't read the first book, May Amelia is the only girl in a large family of Finn immigrants living in a remote area of Washington State around 1900.  Amelia fits into the tradition of feisty tomboy frontier girls like Laura Ingalls, and her first story both made me laugh and made me sob (no spoilers, for those who haven't read it).

While the sequel doesn't quite pack the emotional wallop of the first book, I greatly enjoyed this book as well.  In fact, I felt like I was visiting an old friend whom I hadn't seen in quite some time, one I was glad to catch up with.  How to describe 12-year old May Amelia?  Holm opens the book with the following description:  "My brother Wilbert tells me I'm like the grain of sand in an oyster.  Someday I will be a Pearl, but I will nag and irritate the poor oyster and everyone else until then."  Her Pappa tells her "he would rather have one boy than a dozen May Amelias because Girls Are Useless."  She lives in the middle of nowhere with no girls to keep her company, and she's always being teased by her seven older brothers.  Her father not only runs the family farm but also works at a nearby logging camp for extra cash.

When a quick-talking stranger comes to town, May Amelia finally proves useful to interpret for her father from English to Finnish.  The stranger's looking for investors to develop the land around the Nasel river, and assures Pappa he has powerful supporters.  Pappa would have to mortgage the farm, but is this a once in a lifetime opportunity to bring the family out of poverty and into prosperity?  And will May Amelia finally demonstrate to her father that she has "sisu", or guts?

This story is based on the author's own family history, in particular that of her great-grandfather, who settled on the Nasel River in 1871.  But it is young May Amelia who's the star of this funny but also moving tale of the Western frontier.  She's one of those characters who stays with you long after you've finished her story.  I'd love to see Jennifer Holm continue with more stories about May Amelia as she grows up.  But I hope we won't have to wait twelve years for the next installment!