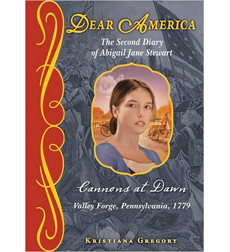 As part of their relaunch of their hugely successful Dear America series, Scholastic has published a sequel to one of the earlier diaries in the series, The Winter of Red Snow, published in 1996.  Two years have past since Abigail chronicled the despair and misery of the terrible Valley Forge winter of 1777-78, but the war still drags on, now nearly four years old.  Her father is camped with Washington's main army in New Jersey when Abby and her family are forced to flee their home after a fire destroys everything they own.  After seeking shelter with a cousin who cannot keep them, they soon join the many women and children who are encamped with the American troops.  They must earn their keep by laundering and mending, and return are given rations by the army.  Martha Washington and her slave, Oney, also live by the camp (although in better accommodations!) and appear numerous times during this story.

When the army moves, Abby and her family must follow along, part of a "ragged, noisy crowd."  The winter is once again brutal and food is scarce and often rotten, filled with maggots.  All are waiting for the Marquis de Lafayette to return from France, with French ships and supplies.  But life goes on, with babies being born in the camp, some new friends being made, and romance blooming between Abby and a young soldier, Willie.  The soldiers build huts for shelter from the winter weather, and Abby tries to keep some normalcy by attempting to teach the younger children their letters.  Spies are everywhere, including the treacherous Benedict Arnold, and with rations and pay scarce and non-existent, the American troops are threatening mutiny.  The British seem to be having victory after victory in the Southern colonies. Will the war ever end?

Although this book can stand alone without having read the first book about Abby's family, I would recommend reading them in order for a richer experience.  Once again Kristiana Gregory captures the adventure, trials, misery, and triumph of this exciting period of American history through the eyes of a sympathetic young colonist.  Highly recommended!
Posted by Fourth Musketeer at 5:00 AM

I really liked this book too. The Winter of Red Snow was one of my favorites from the old Dear America series so I was so happy there was a sequel after all this time!

I'm looking forward to this one. I love the Dear America books.