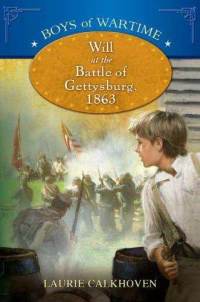 This second offering in Laurie Calkhoven's Boys of Wartime series for middle-grade readers tells the compelling story of 12-year old Will, who lives in the quiet town of Gettysburg, Pennsylvania and dreams of glory as a Union drummer boy. He's too young to enlist without his parents' permission, which his mother is not about to give, but when the book opens Will has no idea of the important role he'll be asked to play for the Union cause.

As Confederate troops march into the town, prowling the streets "like hungry wolves," even forcing the local candy story owner to open his shop so they can clear out the goodies, Will makes an unexpected friend--a drummer boy his age from Tennessee, a friendship that will soon prove more valuable than he can imagine.  Will is as surprised as can be when he finds himself inviting the hungry and dirty boy to supper, where he is greeted with courtesy by Will's family (his mother even offers the ragged boy clean clothes).  Through Will's eyes, we see how the battle came about, with the two sides meeting pretty much by chance at the crossroads of ten major roads at Gettysburg, making a battle at a town the commanders of both armies had never heard of all but inevitable.

As the battle draws near town, Will's sisters are taken to a neighbor's farm nearby, where his mother thinks they will be out of the way of the battle.   As Confederate soldiers take the town on July 1, Will meets an injured Union officer who is desperate to get a message to General Meade.  Can Will help him get through the Confederate lines to complete his mission?  Should he join up with the Union officer and become his messenger?

This is an exciting war novel for middle grade students; as a civilian, Will's character offers a different perspective on the war than we find in many children's novels.  First he's excited to see all the soldiers, and dreams of enlisting himself.  Soon, however, he experiences the horrible sights, sounds, and even smells of battle as he discovers that the peaceful farm where his sisters had been sent has been converted to a hospital, crammed with injured and dying men moaning in pain, begging for water, and filled with the noise of the surgeon sawing off ruined limbs.  He finds himself on the battle's front lines in spite of himself, as the battle progresses to different locations around the town.  Calkhoven vividly describes the sights and sounds of the battlefield--the cannon fire shaking the earth, the roaring of the guns--making us feel that we are right beside young Will.  She also gives us a good perspective on what is happening in the town, where Union soldiers are hiding in Will's mother's house, which is searched by Confederates who Will's mother winds up cooking dinner for.  His house, too, fills up with wounded soldiers.

Calkhoven concludes her novel with Will hearing Lincoln's very short--but later very famous--address at the dedication of the cemetery for the thousands of dead soldiers at Gettysburg.  Will even has a chance to shake the famous man's hand.

The novel includes an historical note, brief biographical information on real historic characters who appear in the novel, a timeline of the battle of Gettysburg and the Civil War, and a glossary.
Posted by Fourth Musketeer at 11:16 AM