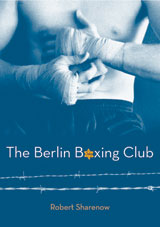 ﻿Recommended for 12 and up.
﻿
Robert Sharenow's gripping new historical novel for teens tells the story of fourteen-year old Karl Stern, a young boy growing up in Berlin on the cusp of the Second World War.  He's never thought of himself as a Jew--his parents are agnostic, he's never been to synagogue, and with his fair coloring, small nose, and tall, skinny build, he doesn't "look" Jewish.  But it's 1934, and the bullies at his school are terrorizing the handful of Jewish students.  After they beat him up, Karl providentially gets the opportunity to take boxing lessons with the world-famous German heavyweight Max Schmeling, who it turns out is a friend of his father's.

Karl's never been much of an athlete, preferring to spend his free time drawing cartoons inspired by American and German comic strips.  In fact, his comics are interspersed throughout the novel.  He's lived a comfortable upper-middle class life in Berlin, with his little sister, their maid, and his parents, who own an art gallery that specialized in expressionist artists--at least until the Nazis deemed their art "degenerate," and forbade galleries to exhibit their work.  But with the Nazis in power, business at their gallery is drying up, and their livelihood is coming from printing illicit flyers and serving as a middleman for desperate Jews anxious to sell their art before leaving the country.

Throughout this period, boxing becomes an unexpected sanctuary for Karl, and the men of the Berlin Boxing Club, where Schmeling trains when he's in town, become a second family for him.  For Karl it's a new world, "a world of men and warriors," where he could dream of becoming German Youth Champion.  As long as no one discovers his secret, that is--that he is Jewish.  Schmeling puts Karl on a grueling training regimen of shoveling coal, push-ups, sit-ups, pull-ups, and running, before he even lets him get in the ring.  Karl also has to re-learn how to stand, breathe, and even eat as part of his training.  Soon he's sparring with grown-up men at the club, aspiring professional boxers who jokingly dub him "the punching bag."  As Karl re-shapes his body, he develops more confidence, even beginning a clandestine relationship with a beautiful Catholic girl in his apartment building.  While hiding his Jewish identity from his boxing friends, he's astonished to discover in American boxing magazines at the club that Italians, Irish, blacks, and Jews dominate boxing in the U.S.  One famous American fighter is even the son of an Orthodox rabbi!

As conditions for Jews worsen throughout Germany with the passing of the Nuremberg laws,  Karl is expelled from school for being Jewish, and his family is evicted from their apartment and forced to move into their gallery.  At the same time, his idol and mentor, Max Schmeling, is pictured in the press hobnobbing with Hitler, Goebbels, and other Nazi leaders; Karl can't make sense of it, considering he knows Max has many Jewish friends and even his American manager is a Jew.  When Max takes on black heavyweight Joe Louis in the ring, it's more than a boxing match; it's a test of the Nazis' theories of Germany racial superiority.  The story comes to a climax around the harrowing night of Kristallnacht, when Karl's father's business is targeted by roving bands of Nazis.  Will Karl's friend Max be able to help save Karl and his family?

Sharenow was clearly inspired by the real-life story of two Jewish boys who were actually rescued by Schmeling on Kristallnacht, although he is careful to note in an author's note that any similarities between the Stern family and the family of the rescued boys are "purely coincidental."  The author's note recounts briefly what happened to Schmeling, who was drafted as a paratrooper during the war, an especially dangerous duty that many interpreted as a "punishment" for his loss to Louis.  After the war Schmeling because a successful businessman with Coca-Cola, and was one of the pallbearers at Joe Louis' funeral (even paying for the funeral expenses, since Louis had fallen on hard times).  An afterword provides details on Sharenow's many sources for this well-researched novel, which included watching newsreels and films of Schmeling and Louis' fights on You Tube, as well as researching comic book pioneers from both Germany and the U.S. and numerous interviews with people who lived in Germany.  Sharenow's website includes a variety of historical video clips, not only of Schmeling and Louis' fights, but of Schmeling and his wife, a glamorous German movie star, in a film they made together, Berlin cabaret music, and more.

So far Berlin Boxing Club has received well-deserved starred reviews from Kirkus and Publisher's Weekly; it's one of the best books I have read so far this year and I'm hoping this is a book the Printz award committee will be taking a close look at.  It's a book that is sure to appeal to many boys--even reluctant readers--but my 16-year old daughter also gobbled it up in one sitting.  There's plenty to appeal to adult readers as well, although the book is definitely a coming-of-age tale that's typical of the YA genre.  Even the minor characters in the book, such as the cross-dressing "countess" who's an old army buddy of Karl's dad from World War I, are highly memorable.  This book is definitely a "must purchase" for public and school libraries.

A discussion guide for the novel is available on Sharenow's website.

For more on the complex figure of Max Schmeling, see a BBC obituary from 2005, when Schmeling died just a few months short of his 100th birthday.

A 90-minute documentary The Fight, on the Louis-Schmeling fight of 1938, is available from PBS' American Experience and through Netflix.  The film's website includes a teacher's guide and a variety of background information on both fighters.

Disclosure:  ARC provided by publisher.
Posted by Fourth Musketeer at 5:00 AM

Even though this had some borderline content, I'm definitely buying it for my 8th graders to read when they study the Holocaust. A very good and powerful book.