Blog Tour: When Bob Met Woody: The Story of the Young Bob Dylan, by Gary Golio and illustrated by Marc Burckhardt (Little Brown, 2011) 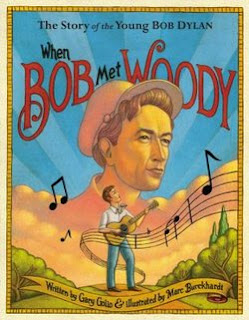 I am delighted to participate in the blog tour for Gary Golio's terrific new biographical picture book on music icon Bob Dylan.

Gary Golio's last picture book was the stunning award-winning collaboration with Javaka Steptoe, Jimi Sounds Like a Rainbow, about rock legend Jimi Hendrix.  In his newest release, Golio turns to another 20th century musical legend, Bob Dylan, and fans of his early work will not be disappointed.

Much like Golio's book about Hendrix, this volume does not attempt to be a traditional biography and tell the entire story of Dylan's life.  Instead, he concentrates on Dylan's youth in Minnesota, when he was just Bob Zimmerman, a Jewish kid who loved music, although he hated taking lessons!  In fact, he taught himself both piano and guitar as a kid.

Golio shows us some of Bob's early influences, as he listens on the radio to the great blues musicians of the time such as Muddy Waters and B. B. King, as well as country star Hank Williams.  Bob's parents thought music was a waste of time, and Bob grew up feeling different--teased for his Jewish heritage, and belittled for his musical ambitions in the small mining community where he lived.  But Bob knew he'd show them all one day, and be a bigger music star than Elvis!

To please his parents, Bob started college in Minneapolis, although he spent most of his time in coffeehouses singing folk music.  At an audition, he told a cafe owner that his name was Bob Dylan--after Dylan Thomas, his favorite poet.  And he practiced and practiced, learning all kinds of music, even forgetting to brush his teeth sometimes because he was so engrossed in his practicing!

When Bob was introduced to the music of folk singer Woody Guthrie, he found a singer/songwriter whom he grew to idolize, so much so that when he heard the singer was in the hospital in New York, he found out the phone number and hitchhiked cross-country at 19 years old just to see him.  He visited his hero in the hospital, even singing a song he had composed just for him:  "Song to Woody."

An afterword explains how by meeting Woody Guthrie, Bob became part of an inside circle of the most important people in American folk music, many of whom helped him find work and even "fed him meals and lent him their couches."  Less than a year after arriving in New York, he had a record deal with Columbia Records.  Golio also describes how Bob's ability to blend different music styles changed the face of American popular music.

Marc Burckhardt's illustrations are a perfect fit for the folksy style of Golio's prose and for Dylan's status a folk music idol.  From Austin, Texas, Marc lives in the "live music capital of the world," and has illustrated several other picture books as well.  In this book, he uses acrylics and oil paper mounted on board to create a vibrant folk art look that reminded me of the monumentality of the figures of Grant Wood and other great American painters.

This is a terrific picture book to share with young people, even better if you can combine it with some song tracks (try Youtube for some free links, including rare surviving footage of Guthrie performing) from both Dylan and Woody Guthrie, making together a valuable lesson in the evolution of American folk music!  Adult fans of Dylan will enjoy sharing this book with children in their lives as well, as a way to introduce them to a great figure in American music.

For more on When Bob Met Woody, check out the remainder of Gary Golio's blog tour:

Also, here's a link to the New York Times' review of Golio's book:

Great post. Hope I would also have been a part of the game. But I am not that much professional to be. any ways its nice for me to come across this post. Thnx a lot.