Book Review: Inside Out and Back Again, by Thanhha Lai (Harper, 2011) 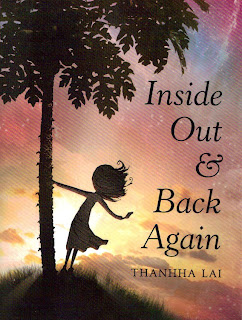 
In this story written in a series of free verse poems, debut novelist Thanhha Lai spins a moving and compelling tale of a young Vietnamese girl who moves with her family from war-torn Saigon to Alabama in 1975, at the end of the Vietnam war.  When the book opens, Hà and her family are celebrating Tet, the Vietnamese New Year.  She lives with her three older brothers and her mother; she can't remember her father, a navy officer, who was captured by the enemy years before, and no one knows if he is even still alive.

As the war approaches Saigon, Hà and her family must prepare to leave, packing just a few belongings with them.  A particularly poignant poem itemizes what they must leave behind, including "Brother Quang's/report cards,/each ranking him first in class,/beginning in kindergarten..."  Hà must leave her beloved papaya tree, where the fruit is still not ripe.  Author Lai does a wonderful job of evoking the sights, smells and sounds of Vietnam for the American reader.

Their voyage by ship is dangerous and miserable, with not enough food, water, lights, or bathroom facilities.  When they finally reach the open sea, they are rescued by an American ship, which tows them to a refugee camp in Guam.  Where will they go from there?  They choose America, where Hà 's mother believes there will be opportunities for her children to go to college.  But first they must be sponsored by an American family.  Finally a "cowboy" rescues them, and they go off to Alabama.

It's almost impossible to imagine how foreign Alabama must have been for these Vietnamese immigrants, until we read "American Chicken."  In this poem, Hà explains how their cowboy brings them "a paper bucket of chicken/skin crispy and golden,/smelling of perfection/..."  But when they taste the meat, her mother spits it out, and her brother gags; "Brother Quang forces/a swallow/before explaining/we are used to/fresh-killed chicken/that roamed the yard/snacking on/grains and worms/...I bite down on a thigh;/might as well bite down on/bread soaked in water./ Still,/I force yum-yum sounds."

For Hà , it's a world of "clean, quiet loneliness."  And living on the charity of others isn't easy for Hà and her family, who were used to a nice standard of living in Saigon.  Hà is befuddled by the idiosyncrasies of the English language, remarking that "whoever invented English should be bitten by a snake."  Her classmates make fun of her, and she hates feeling dumb, having to learn ABC's and numbers when in her own country she knew fractions and was the smartest in her class.  It's hard not to wish to be invisible in this strange new place.

However, some Americans are kind to Hà and her family; a neighbor tutors them all in English, their "cowboy" brings them gifts of chips and chocolate, and her teacher lets her eat lunch in her classroom to avoid the misery of the cafeteria and the tyranny of bullies.  Will Hà succeed in building a new life for herself in this new country?

Although she comes from a background foreign to most of us, readers will nonetheless identify with Hà's spunky character, her squabbles with her brothers, and her difficulties fitting into her new life.  This novel is already getting some early Newbery buzz, and it's definitely one to put on your to-read list.

Some other blog reviews include:
Madigan Reads
Fuse #8
Dog Ear
GreenBeanTeenQueen
Posted by Fourth Musketeer at 5:00 AM

I checked this out from the library weeks ago along with another stack of recently published children's works--now I'm even more excited to read it!

Nice review! I've read one verse novel before and I loved it. Totally checking this one out :)